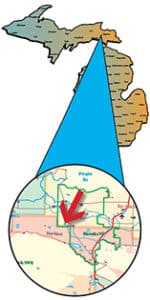 Carp Lake in Chippewa County is a nice lake that features a mixed bag of fishing opportunities. There are no carp in Carp Lake, which is also known to locals as Trout Lake or Big Trout Lake. But there are no trout in the lake, either. However, the town of Trout Lake is just a mile east of the lake and may explain why the locals call it Trout or Big Trout Lake.

Regardless of what it’s called, Carp Lake produces some decent walleye, pike, and panfish action.

“The overall fish community of Carp Lake continues to be remarkably stable,” wrote DNR fisheries biologists Neal Godby and Tim Cwalinski in a summary report following a 2019 survey of the fishery. “The only differences over time have been the continued improvement in walleye natural reproduction and the reappearance of bluegill in the 2019 survey catch.”

Located in southwest Chippewa County, the 560-acre lake is the largest lake in the Carp River watershed. You won’t find any major points or steep drop-offs, though, since the lake  features a gradually sloping bottom. It’s maximum depth is 35 feet.

Several streams enter Carp Lake, including the outlet from Little Carp Lake (Kneebone Creek) along the northeast shore and Big Ditch, Betchers and Schweinger creeks along the south shore. The outlet on Carp Lake is a channel that forms the Carp River. There is no water level control structure on the outlet.

Aquatic vegetation is limited to emergent bulrush beds and various species of pondweeds and other submergents.

Back in 1974, the DNR constructed three limestone reefs over 16,280 square feet in shallow water along the north and northeast shore in an attempt to promote walleye spawning and create nursery habitat. The reefs worked, and with a little supplemental stocking, the lake now sustains a naturally reproducing walleye fishery.

Carp Lake has a long history of management by the DNR and its predecessor, the Michigan Department of Conservation. Records indicate that stocking dates back to the 1930s, when walleyes were first released. Fry and fingerling walleye were stocked in Carp Lake between 1934 and 1945. Bluegill and largemouth bass were planted between 1948 and 1951.

A netting survey of the lake in 1971 showed that walleyes were present, but not in strong numbers. Most of the fish were small, running between 10 and 12 inches. Since walleyes had not been stocked in over 20 years, biologists assumed these fish were wild. In an effort to supplement that natural reproduction, the spawning reef was built.

Walleye stocking resumed in 1974 and continued through 2001, when the last of those planted walleyes – 11,442 spring fingerlings – were released into the lake.

“By the turn of the millennium, natural reproduction of walleye was considered improving in Carp Lake and walleye stocking efforts were discontinued following 2001,” biologists wrote in the report.

Yellow perch and rock bass were the two most abundant species. The perch ranged up to 8 inches, but most were in the 3- to 4-inch range. Rock bass ranged up to 10 inches.

The survey also produced good numbers of walleyes to 31 inches, pumpkinseed sunfish to 9, white suckers to 21, and northern pike to 25. The pike, however, were found to be growing 3.1 inches below the state average.

“Since surveys of Carp Lake over the years have consistently documented slow/poor growth of the relatively abundant northern pike, a liberalized regulation was instituted for this species in 2013,” biologists wrote in the report. “The regulation includes no minimum size limit and a five-fish daily possession limit, with no more than one fish over 24 inches. This is consistent with the regulation on neighboring Frenchman Lake, as well as other lakes throughout the state that have abundant, slow-growing northern pike populations.”

The survey also produced light numbers of bluegills to 9 inches and smallmouth bass to 18.

To catch those wild walleyes, try pitching jigs tipped with leeches, nightcrawlers, or minnows. The spawning reefs along the north shore provide some fishing action early in the season and the deeper water outside of those reefs produces later in the year. Anglers also report catching walleyes along the breaks off the point on the east shore and at the mouth of the narrows on the south end.

Pike are caught mainly on live bait fished throughout the lake. Check the breaklines and weedbeds at the south end.

Work the 10- to 12-foot depths for summer smallies, which are fond of drifted crawlers and minnows. Tube baits dragged through the sand and spinnerbaits zipped along the breaklines and weedbeds will also attract smallmouths.

The public access site is located in the township park on the north shore of Carp Lake. It’s run by the DNR and features a paved ramp, water deep enough for larger boats, and parking for 30 vehicles.