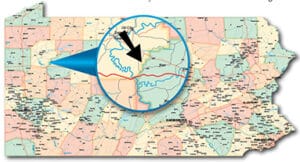 In sports, there are great teams and then there are dynasties. The former burn bright for a season, maybe two, then flame out. The latter sustain excellence over the long haul.

Kahle Lake is a dynasty.

Not that you’d know it necessarily.

A Pennsylvania Fish & Boat Commission lake in Clarion and Venango counties, it’s 241 acres. In other words, big enough, but not huge.

It has two boat launches, one on the north end in Venango County, the other on the south end in Clarion County. But even in the best of times, it’s open only to non-powered boats and those with electric motors.

On top of that, it’s a bit on the skinny side these days, being drawn down about 3 feet because of its aging, in-need-of-repair dam.

All of those things combined keep at least some of the powerboating, run-and-gun bass fishermen away. Sure, the lake gets plenty of attention from locals, but not as much as it might from outsiders.

If only they knew.

Kahle Lake holds pretty nice populations of panfish. Black crappies, bluegills and pumpkinseeds all are plentiful and often enough large. There are some yellow perch in the lake, as well, and they occasionally reach nice sizes.

Every once in a while an angler even gets a walleye at Kahle Lake, a holdover from the days when the Fish & Boat Commission stocked them here.

But it’s in terms of largemouth bass fishing that Kahle Lake really reigns as a champ, many times over.

The numbers show that.

Fish & Boat Commission biologists sample most lakes, to examine fish populations, once every five to eight years. Sometimes the span of time in between examinations is even longer.

That’s not true at Kahle Lake.

“Historically, catch rates for largemouth bass in Kahle Lake have been exceptional when compared to other northwest Pennsylvania waters of similar size,” wrote commission biologists in one of their survey reports.

That was true 20 years ago, and it remains true today.

Take the October 2018 sampling effort as an example. Biologists and students captured, measured and released 1,456 largemouth bass. That was the second-best total seen in the past decade.

There’s a better way to look at that, though.

Not every survey lasts equally long. Some years crews are on the water for five hours, some years for three and some years for more or less. So, to compare bass populations from year to year, biologists calculate the number of fish caught per hour.

The 2018 take – of 260.8 bass per hour of effort – was the fourth highest catch rate of the past decade, higher than the 10-year and longer-term means.

The bass collected in 2018 ranged in size from 2 to 19 inches. That’s nice. But there’s a way to put that into perspective, too.

Kahle Lake is managed under “big bass” regulations. That means anglers are limited to keeping four fish a day, and all must be at least 15 inches. By comparison, on waters managed under statewide rules, the daily limit is six bass per day, and they need be just 12 inches.

The special big bass rules are meant to provide larger bass, on average.

The commission has standards to determine if they’re working. A successful “big bass” lake will produce 35 bass per hour of sampling, total, with at least seven per hour stretching longer than 12 inches and at least two exceeding 15 inches.

Kahle Lake has topped – and many times absolutely crushed – those benchmarks every year since 1993. Now, some years have produced more big fish than others, and largemouths longer than 20 inches remain uncommon, as in many waters. But the odds of catching a really nice bass at Kahle Lake are really good, year after year after year.

The 2018 survey suggested that will remain the case, too. Biologists and students handled what they termed an “impressive number of young bass.”

And there’s more good news yet.

“Equally impressive is that (young of the year) largemouth bass grow exceptionally fast in Kahle Lake and can reach up to 7 inches in length in their first year of life,” biologists wrote.

“Additionally, the abundant numbers of these younger bass in the 3- to 5-inch range, not only this year but also over the past several years, are indicative that good spawning success,  and high survival rates of spawning adults continues to occur annually in Kahle Lake.

“With multiple year classes being represented; anglers can expect this naturally reproducing, self-sustaining largemouth bass population to continue to provide great fishing opportunities now and well into the foreseeable future.”

WHAT YOU SHOULD KNOW: The lake has two boat launches, one on the north end of Venango County, the other on the south end of Clarion County. It’s open only to non-powered boats and those with electric motors. The lake is managed under “Big Bass” regulations. Anglers are limited to keeping four fish a day, and all must be at least 15 inches. The odds of catching really nice bass at Kahle Lake are really good, year after year after year.