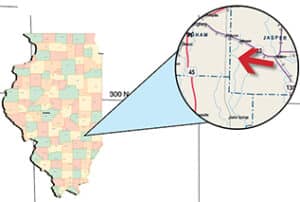 DNR’s assessment that there are fewer “big” largemouth bass swimming in Newton Lake these days compared to a decade ago may indeed be accurate.

But don’t write the Jasper County lake off quite yet.

According to DNR’s report on fishing tournaments held on Newton in 2019, several bass over the 6-pound mark were weighed in, including a 7.7-pounder and a couple more that came in right at the 7-pound mark.

It’ll be some time before we see how anglers did this summer, but chances are Newton’s reputation as a prime largemouth lake will be upheld.

DNR’s most recent survey of the 1,750-acre cooling lake revealed that the size structure of the bass population remained relatively stable over the last year.

“The percentage of adult bass greater than the 18 inches remained consistent at 12% of the sample for the second straight year,” DNR reported. “Our catch rate increased to 207 bass per hour, well above the target value.”

“Hot” lakes, like Newton, offer size, structure and cover to fish not found in other lakes during winter. Anglers say patterns that often are not used in winter months at other lakes tend to work on these fisheries.

Newton Lake bass feast on shad 12 months of the year, so anglers should make sure their tackle includes shad baits.

On the downside, DNR noted, “the fishery is slowly beginning to show signs of change.”

“Recent changes to regulations governing coal fired power plants have significantly reduced the amount of hot water discharged into the lake,”the report on Newton explained. “This has resulted in a reduced growing season, and a shorter spawning season for prey species, especially gizzard shad. In short, it is transitioning from a cooling lake to an ambient lake. At the same time, bass recruitment continues to be high, body condition is good and growth rates remain at or above average.”

Fisheries biologists say anglers can expect to catch large numbers of bass in the 15- to 20-inch range weighing 2 to 6 pounds, with a few closer to 7 pounds.

Some notes from DNR on other species in Newton Lake:

“Although still dominated by smaller fish, the population contains an adequate number of large fish to provide a good quality fishery,” biologists reported. “The majority of the catch will be comprised of fish 1 to 4 pounds, with some larger fish up to 5.5 pounds.

White bass: DNR’s report stated that the white bass population in Newton has successfully recruited each year since they were first discovered in 1994.

“With few exceptions, their numbers have remained relatively constant,” the report said. “The electrofishing catch rate in 2019 increased and was above the historic average. The population continues to exhibit good growth rates and body condition.”

Most of the lake’s white bass will range from 10 to 13 inches, with larger fish up to 17 inches.

Crappies: Black crappie numbers continued to improve, but remained low, according to the DNR survey. Growth rates were good and body condition remained above target.

“In spite of the relatively low numbers, some anglers successfully target crappie each spring and consistently catch limits,” DNR noted.

Bluegills: The bluegill population remains in poor condition. High summer temperatures (Newton Lake has very little thermal refuge) and a dense population of shad contribute to poor reproduction and slow growth, DNR explained. The majority of the bluegill collected were less than 6 inches in length and no bluegills over 7.5 inches were collected. In general DNR advises that Newton is not recommended for bluegill fishing.