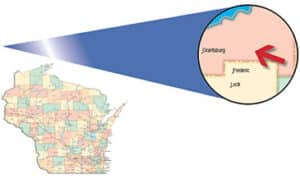 The DNR’s Marathon County fisheries team ran a two-part survey on the Mosinee Flowage in the spring of 2019. The crew first ran a fyke netting survey shortly after ice-out and followed that with an electrofishing survey. As might be expected, the game fish results, as far as numbers and size of fish, fared better during the earlier fyke netting survey. The late spring electrofishing survey largely targeted bass and panfish.

The crew also sampled Half Moon Lake, an adjoining body of water that’s also on the Wisconsin River. The Mosinee Flowage is usually considered to cover about 700 acres; with Half Moon the acreage total runs a tad more than 1,000.

High catch rates were observed of white crappies, channel catfish, common carp and bluegills, but no fyke net standards exist for these species. Regardless, high density channel catfish, white crappie and common carp populations are a typical feature of more turbid river systems, which can be a reoccurring environmental characteristic of the Mosinee Flowage, wrote Parks in the report.

Lower catch rates of sucker and redhorse species, and higher catch rates of common carp, may be indicative of habitat issues or issues related to fish community dynamics. Catch rates were not calculated for many species due to low samples sizes in the nets.

For sunfish and bass species, late-spring electrofishing may provides more consistent and representative data for status interpretation of these fish populations than with fyke netting.

All of the mean and maximum total length standard ranges were attained or exceeded by black crappies, walleyes, northern pike, muskellunge and white sucker.

Yellow perch size structure was fair to poor, which may provide some indication of issues facing this population and should be further investigated.

Age structure results showed the population was represented by only a few year classes.

The channel catfish population appears to be high density and with size structure limitations. This could be a density-growth limitations. Although unknown, promoting additional harvest may improve these dynamics.

Smallmouth bass catch rates in the Mosinee Flowage ranked between the 50th and 75th percentile when compared to CPE standards for flowages. This means that smallmouth abundance was normal to high compared to other flowages, which is a good sign for smallmouths.

Lower catch rates were observed for bluegills, rock bass and largemouth bass. Compared to CPE standards for flowages, electrofishing catch rates of bluegills, rock bass and largemouths were ranked below the 25th percentile, which may indicate poor abundance for these species Although late-spring electro-fishing is typically not the appropriate survey to assess spring walleye abundance, high catch rates were observed for walleyes.  Currently there are no electro-fishing CPE standards developed for walleye comparisons in riverine flowages. Regardless, early-spring fyke netting survey results from 2019 suggests that walleye abundance is considered normal to high, which is probably why walleye exhibited the highest electro-fishing catch rates in the survey.

Bluegill size may be considered larger than normal, too, but due to a small sample size, the uncertainty of this estimate is high and lacks precision.

Low sample sizes of largemouth bass and other panfish species captured during the 20`9 survey were insufficient for precisely estimating size structure metrics.