Walleyes, smallies won’t throw you a curve on Crescent 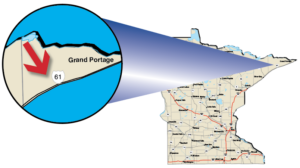 Nestled beautifully within the Superior National Forest, Cook County’s Crescent Lake is a structure-rich, 755-acre fishery noted for its rocky habitat, dinner-sized walleyes, and better-than-average opportunity to catch a muskie.

Simply put, walleyes are numerous, but they’re not very big. It’s seems to have always been that way in Crescent, which continues to hold an abundant, naturally-reproduced walleye population.

Muskies were introduced to Crescent in 1977 and have been self-sustaining since that time. Like the lake’s walleyes, its muskies are plentiful but not large. They’re Shoepack-strain fish that rarely exceed 30 inches in length.

Toss in a smallmouth bass population that’s so thick they’ve become somewhat of a nuisance and your odds are pretty high that you’re going to get some action during an outing on Crescent.

The lake’s walleyes tend to draw the most attention among anglers. These are fish that benefit from the lake’s rock, rubble, and boulders to pull off consistent years of in-lake spawning.

But if you catch a walleye over 20 inches from Crescent’s waters, consider yourself lucky, because they just don’t grow big here.

“Crescent is fished hard for walleyes, but it’s always been a numbers game,” said Steve Persons, DNR Fisheries supervisor in Grand Marais. “Typically, (angler) harvest begins at about 12 inches. That’s (the lake’s) reputation – a lot of 12- to 14-inch walleyes.”

While most people fish Crescent for walleyes, there’s a pretty good chance you’re going to catch a muskie from the lake as well. If you choose to target them, a double-digit muskie day is quite easy to accomplish.

Because these are Shoepack-strain fish (lakes now are stocked with the larger Leech Lake strain), there’s limited potential for the lake to produce muskies of great size. They usually average 25 to 30 inches in length, with the occasional 35- to 40-incher in the mix.

“Muskies have a little bit of a following on Crescent, but I’ve only seen a couple approaching 40 inches in our surveys,” Persons said. “The numbers are pretty good and you’re probably going to catch a muskie if you try for them.”

There’s been a relatively new development with the lake’s muskie population as well.

During the last DNR survey, conducted in 2014, two fish that showed up in gill nets were considered to be tiger muskies based on color and pattern markings.

It was the first time a muskie of this type was sampled. Persons said the lake does have a low-abundance northern pike population so the potential for cross-breeding is present – thus a few tiger muskies in the lake wouldn’t be surprising.

The bottom line is that if you want to catch a muskie, it’s pretty easy to do so on Crescent. Just how easy?

“I’ve talked with anglers who have been irritated catching muskies (when fishing for other fish),” Persons said.

The same can be said about Crescent’s smallmouth bass population. Their numbers have increased a lot during the past decade – to the point that they also have become somewhat irritating for anglers fishing for walleyes.

They are slow-growing bass that do not get big, rarely exceeding 10 inches in length, according to Persons.

“I’d say they are now at a nuisance level and they’re pretty small,” he said of the smallies. “You’d have to fish a long time to catch one that’s 12 inches long.”

First-time Crescent anglers also need to be aware of the lake’s numerous midlake rock piles and reefs that aren’t marked by buoys or on maps. Its dark water adds to the uncertainty of knowing where they exist, so exercise caution when boating on it.