One potato, two potato, try White Potato for all species

White Potato Lake, about 10 miles west of Pound, is one of Oconto County’s most popular inland lakes and offers a variety of fishing opportunities. 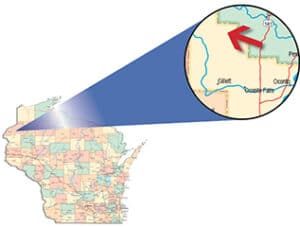 DNR fisheries surveys in 2008 and 2013 indicated healthy populations of panfish and game fish, although the local DNR crew found no evidence of natural walleye reproduction in 2008 or in ensuing years.

A tag-reward study was initiated in cooperation with the White Potato Sportsman’s Club during the 2013-14 season. Signs were posted at all five landings and advertised on the club’s website. Tags were eligible for reporting from the opening day of season until March 2, 2014. The data collected from tag returns was used to estimate walleye harvest and annual mortality.

A total of 1,630 bluegills were collected, ranging in length from 2.5 to 8.8 inches and averaging 6 inches. Sixty percent of the bluegills collected were 6 inches or greater and showed average growth rates compared to other northeast Wisconsin lakes.

The drop of crappie abundance from 2008 to 2013 was likely the result of the late ice-out in 2013. Crappies are collected in higher abundance in fyke nets than electrofishing. Also, crappies are cyclical spawners; recruitment can be highly variable and unpredictable year to year. The 2008 survey revealed a strong year class of around 9 inches. The 2013 survey indicated a strong year class of age-2 fish averaging just over 7 inches.

The crew caught 1,005 walleyes during electrofishing and fyke netting, including recaptured fish. Walleyes ranged from 7.9 to 24.5 inches and averaged 15.9 inches. Walleyes were reaching legal size (15 inches) by age 4. Growth was average until age 6, but below average from age 7 and older. The population estimate for adult walleyes came in at approximately 2.1 walleyes per acre, a healthy number for a stocked fishery.

Yellow perch comprised 2% of fish collected in 2013 and 8% in 2008. Perch spawn was observed on April 28 while fyke nets were being set. Reduced catch rates are not indicative of a decline in abundance. A modest evaluation of perch stocking occurred in 2012-13 whereby 2,000 perch were fin-clipped (left ventral) before stocking. Overall, five out of the 41 perch registered were stocked fish and only two of 13 perch over 10 inches were fin-clipped. While stocked perch are used by anglers, it is evident that perch stocking is not necessary.

The team caught 38 muskies in 2013 that ranged from 36.8 to 49.3 inches and averaged 41.5 inches. The ages of 22 muskies ranged from 5 to 16 years old. Age 14 muskies were the most represented year class and averaged 41.9 inches. Muskies reached the 40-inch size limit between ages 12 and 13. The adult muskie population estimate was 43, or .05 fish per acre, down considerably when compared to the estimate of 86 muskies from the 2008 survey. Overall, muskellunge growth was average compared to other lakes in northeast Wisconsin.

The local team suggested the stocking rate of 10 small walleye fingerlings per acre be increased to 35 per acre. The staff also identified two areas that would be ideal for creating walleye spawning habitat – along Bodega Point and the shoreline east of the water control structure. These locations receive a great deal of wind and wave action that would stimulate walleye spawning.

The team also suggested White Potato be stocked with muskies at a rate of 250 large fingerlings per year since it appears as though natural reproduction is not sustaining a fishable population. The stocked fish would be fin-clipped for future evaluation during surveys.