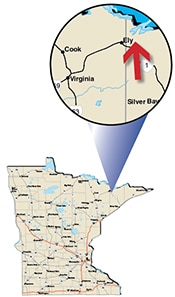 The White Iron Chain of Lakes in Ely includes some of Lake County’s most popular fishing destinations. Each lake produces black crappies and good numbers of walleyes, while nice-sized northern pike and smallmouth bass are abundant, but not as frequently targeted by anglers.

Farm Lake, which is just south of Garden Lake and on the edge of the Boundary Waters Canoe Area Wilderness between South Farm and White Iron lakes, is no exception.

From a habitat standpoint, the 1,292-acre Farm is geared toward walleyes. Farm is rich with rock and sand, wind-swept shorelines, and current areas. These features allow the walleye fingerlings stocked by the DNR during odd-numbered years, along with those produced naturally, to thrive and provide excellent angling opportunities.

Edie Evarts, DNR fisheries supervisor in Tower, says a 2017 survey of Farm Lake yielded a walleye abundance that was slightly higher than historical averages. An average of 6.1 walleyes per gill net were sampled, and the average size, 15.3 inches, was the best of any survey ever conducted of the lake.

Increased numbers could be the result of a 17- to 26-inch protected slot that has been in place on Farm since 2006. While intended to improve the size of walleyes, it seems to have had a bigger effect on the numbers of the species.

“It looks like the slot has had a small effect on the size structure, but walleye abundance has gone up,” Evarts said. “The system doesn’t grow real big walleyes, and they do grow slowly.”

Consider that it takes about six years for a walleye to reach 15 inches in this system, Farm Lake included. So while there is no shortage of keeper fish under 17 inches, bigger walleyes are difficult to find .

Steve Renneberg, owner of Arrowhead Outdoors in Ely, says he knows of two 30-inch walleyes caught on Farm Lake last summer. In addition, there seem to be plenty of fish in the protected slot, which he attributes to the abundant cisco population these fish utilize as forage.

“With all those ciscoes in there, there’s a definite chance to catch big walleyes,” Renneberg said. “During the summer months, people struggle to catch walleyes outside the slot. There are a lot of walleyes between 17 and 26 inches in Farm.”

The lake also holds big crappies, if you can find them. Generally, South Farm Lake tends to be the more popular crappie spot, known for producing better numbers of fish.

But during certain times of the year, like right now as shoreline ice starts to pull away and each spring when fish are up shallow, Farm Lake kicks out quite a few slab crappies.

An abundance of fatty ciscoes also bodes well for the lake’s caliber of northern pike. There’s a 24- to 36-inch protected slot in place for pike, and while fish less than 25 inches are most common, Farm does produce larger pike.

Evarts says the DNR doesn’t see many fish over 30 inches in its lake assessment work. But she does get reports of bigger pike being caught, noting that most people seem happy with the pike they catch.

“There are a lot of nice pike in the chain – 40-inch fish, including (from) Farm Lake,” Renneberg added. “People catch really nice pike out there, especially during the spring, when they are in the shallow bays.”

Although abundant and good-sized, smallmouth bass are somewhat of an after-thought on Farm. This is primarily due to the fact that smallies are plentiful in just about every lake in this area and are relatively easy to catch.

“Smallmouths aren’t that big of a deal up here,” Renneberg said. “People go to Farm for walleyes, crappies, and pike.”