Ice anglers who stow their gear at the end of February are missing out on one of the hottest and most entertaining bites of the season. 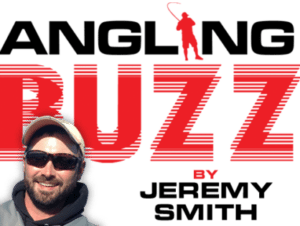 Stronger sunlight begins melting snow from the surface of lake ice, revealing clearer ice below. The rays penetrate below the ice and kick-start the entire underwater food web, starting with planktonic algae. The tiny plant cells produce oxygen and attract zooplankton, which in turn brings panfish and larger predators into the shallows.

At the same time, melting ice in connected wetlands starts seeping into the shallows, bringing nutrients that help fuel the growth process. Milder weather lets you fish without your heavy bibs, and some days, you can even leave your gloves at home.

On flats that may run from 3 to 8 or 9 feet deep, some aquatic plants often remain, adding cover. On lakes that support a lot of sandgrass, you may encounter large groups of perch cruising, looking for easy pickings. But even in bare areas, crappies, big bluegills, and other species swim along, often just under the ice.

These fish don’t appear on sonar, so you often can just carry a rod and an auger. And during these milder conditions, holes don’t freeze overnight, thus offering plenty of spots to drop a line quickly, without cutting new holes.

I like a longer rod, because you can stand back a bit from the edge of the hole. At times you come almost eye to eye with big panfish and pike. In-line, fly-type reels are ideal because they keep your line twist-free and you can lift fish straight up and out of the hole.

Twitching and slightly lifting and dropping a small jig (1⁄32- to 1⁄16-ounce) with a soft plastic bait usually does the trick. Plastics with one or two slender tails work well, because the slightest movement gives them lifelike action. These fish are in a feeding mood, so you usually don’t have to wait long if a fish is nearby.

Where perch, bass, and larger crappies are present, a small jigging spoon also works well, while discouraging the small bluegills you may also find up shallow. Just twitch and shake it gently in place. Because fish almost always ride high, don’t fish too deep in the water column or they won’t see your lure.

It’s important to check ice conditions carefully when you leave the shore because they can deteriorate quickly once milder conditions and strong sunlight begin melting a lake.

Don’t walk on ice that has a honeycombed appearance, because it’s very weak, even if it’s more than a foot thick. Also, be careful at access areas where vehicle traffic throughout the winter often has gouged ruts and cracks that are weakening now.

The safest approach is to walk out, though four-wheelers make it easy to travel more than a mile or two as long as a good, solid base of hard ice remains.