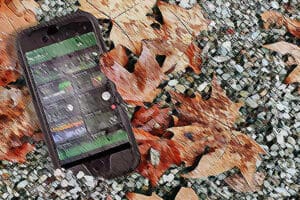 Hunters, trappers and anglers go afield today more informed and aware of the landscape, weather and each other than ever before thanks to smartphones and increasingly powerful apps.

It’s not that we were helpless before all of these apps came along, of course. We’ve long had compasses and barometers. Some of us remember the early portable GPS units in the mid-1990s. They were about the size of a brick, but half as thick and not much lighter. By the late 2000s, GPS units were much lighter and about the size of a cigarette pack, but fatter. In either case, we thought GPS units were the zenith of technological wonders.

And then Apple released its iPhone on June 29, 2007, and announced this “smartphone” would support third-party “applications.” Most of us didn’t realize our world had changed, and that handheld GPS units would soon become backup technology.

Maybe we didn’t instantly realize the iPhone’s significance because we didn’t understand what “third-party applications” even meant. We learned soon enough by downloading “apps” that delivered quadrangle maps, hydrographic maps, weather forecasts, aerial photographs and fishing reports – and connected us to email, online stores, news services and other useful stuff.

And try as some did, we couldn’t ignore apps like Google Earth that gave us free, instant aerial views of hunting lands. Even better, the smartphone’s internal GPS receiver put a blue dot on the photo to show us where we stood. In our previous lives, we ordered rolled-up aerial photographs that cost serious money and took weeks to arrive.

Amazing apps just keep coming, of course. At last count my iPhone 8 has 114 apps. Not all of them are helpful for hunting and fishing, but I’d guess at least 25% prove useful in the outdoors. When asked to choose my top five apps, here’s what I chose:

4. NOAA BuoyData (Wind and wave conditions on the Great Lakes)

OK. I cheated. I listed three weather apps and the BaitFinder app, which helps you find the nearest bait shop no matter where you’re fishing. I repeatedly use any app that spares me frustration and wasted time. Nothing frustrates me as often as knots, so I reference two useful apps for fishing, hunting or camping.

Even so, I don’t consider myself the expert on outdoor apps, so I polled 12 friends of all ages and both genders to request their top six apps. Here’s how that went:

I also note that all of them use their smartphone’s camera, and some even use special apps to edit their photos, but I didn’t include the camera as an app. If the phone itself doesn’t make the list as a useful app, I can’t justify its camera, either. Let’s discuss these top apps, and why my group of experts chose them.

What can we say about onX Hunt? How about this: If you don’t have onX Hunt on your smartphone, you probably shouldn’t own a smartphone. Of the 12 folks I surveyed, 10 had onX Hunt. The next most popular app was Navionics Boating with four of 12.

Safe to say, when you install onX Hunt, you’ll learn more about your hunting area than you thought possible, and it will keep you honest or out of trouble. Not only can you see where you are on aerial views, but you’ll know how close you are to the neighbor’s land, and you’ll learn who actually owns that property.

And if you’re heading off the grid, such as a trip to Minnesota’s Boundary Waters Canoe Area Wilderness or the Missouri River breaks in eastern Montana, simply download the maps and aerial views on onX Hunt while connected to the internet. They’ll instantly work once you’re onsite. Folks also like how easily onX Hunt locks in waypoints, creates routes, and predicts/plans ambush sites for ground blinds and treestands.

Weather apps achieved the No. 2 slot because eight of the 12 mentioned experts had at least one weather app, and most had several. Most use NOAA, Accu-Weather, Weather Channel, MyRadar, The Moon, Wind Alert, Weather Underground and Weather Bug.

As one wrote: “I really don’t have a favorite weather app for forecasts. I’m more interested in live radar and wind forecasts. If an app can’t quickly show me a radar view of the area, I close it and fire up another app. If it’s routinely slow to load, I delete it.”

Our experts also liked Navionics because it’s useful on the ice or in their boat. “I’m amazed how well it displays the various depths on a map by color,” one wrote. “It’s also great for marking spots and sharing info with fellow anglers.”

Finally, RipaLip University is a great idea for anyone confused by fishing electronics. It provides anglers the information they need to easily set up, tweak and dial-in their marine electronics without the need for cumbersome and lengthy owner’s manuals. It solves an ongoing problem for recreational anglers: the need to easily retrieve information while on the water.

Even with all the great apps already available, one of my experts thinks someone needs to create an app that prevents him from firing off mean text messages when hunting buddies don’t follow his instructions during deer drives, or when he gets mad while reading emails.

“This app would check my blood pressure and shut off my phone’s touch-screen until I calm down,” he wrote.

Don’t worry. Given the speed of app engineering, there’ll be an app for that soon enough.