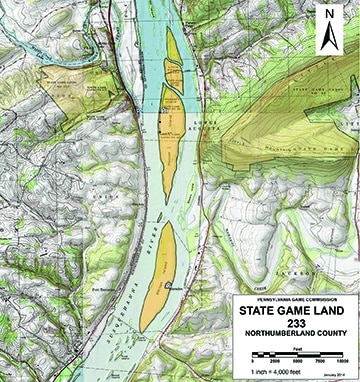 With interest in duck and goose hunting waning, beginning in the late 1950s, the Game Commission embarked on a long-term management plan to obtain some Susquehanna River islands and induce natural waterfowl reproduction.

This restoration plan was one of the agency’s most successful endeavors. The initial island acquisition occurred in the late 1950s, when Hoover Island was purchased.

This 275-acre tract is primarily composed of agriculture fields. After taking ownership of this island, along with several other islands, these parcels were originally managed extensively for geese, with this improved habitat also benefiting ducks, doves and various shore bird species.

A barn dating back to the late 1800s was located on Hoover’s Island and was used for storing equipment. Several ponds were immediately constructed on the island, and commission food and cover employees continue to manipulate water depths in these ponds and provide necessary maintenance.

Located in the river between Northumberland and Snyder counties, the island’s original owner was Conrad Weiser, who was deeded the property by the Pennsylvania government.

Weiser, who is a well-known Keystone State historical figure, reportedly enjoyed an excellent reputation with the local Indian tribes and was instrumental in peaceful negotiations with several.

In earlier years, this island was known as Rhine’s Island and Hall’s Island. In the late 1800s, after the Hoover family purchased the island, several generations worked the farm. In that era, Hoover’s Island became the accepted name.

Adjacent to Hoover’s Island is “little Hoover Island,” which is 53 acres in size. This island was donated to the Game Commission by the Hoover family and in earlier years was referred to as Weiser’s Island and Silverwood Island.

This island is also currently “farmed” by sharecroppers. These two islands are jointly designated as State Game Land 233.

In 1988, two additional islands, White’s Island (286 acres) and Brown’s Island (70 acres) were acquired by the commission. These parcels were obtained in a land trade negotiation involving a portion of a game land in Monroe County.

In 2004, the Game Commission purchased Groce Island, (42 acres) for $16,800. Mostly forested, this tract, which lies in August Township in Northumberland County, is also part of State Game Land 33.

Another important link in this chain of islands is Swigart’s Island. This designated propagation area is 159 acres, with much of that under cultivation by sharecroppers.

The mainland portion of game land 258 offers rolling overgrown fields and small woodlots, which collectively provides some small-game hunting opportunities. Located in northeastern Perry County, in addition to the parking lot and boat access on the west shore of the Susquehanna, another parking site is available approximately one-fourth to the west on an interior game land road.

The final links in the acquired chain of islands are Haldeman Island (714 acres) and Duncan’s Island (210 acres). Located near the juncture of Route 11/15 and Route 22/322, their combined acreage of 924 acres is designated as State Game Land 290.

The total acquisition of Haldeman and Duncan’s islands was $650,000. Haldeman Island is mostly agriculture land with about 633 acres of tillable acreage. Approximately 357 acres are designated as a propagation area.

Duncan Island, while smaller, is a local favorite. There are two parking lots with access located near Route 11/15 and Route 22/322. On these islands, small impoundments have also been constructed, then planted with grains and grasses.

Fields are mowed for pasture. As with the other islands, numerous wood duck boxes, as well as other waterfowl and songbird nesting structures have been erected.

In early years, under the ongoing management plan, the resident Canada geese population prospered, as did goose populations throughout the state. The ensuing result was that the resident goose population overflowed onto farms, state parks, golf courses, large industry landscaping projects and other parcels that offered “grazing” opportunities.

To help relieve the goose annoyance problem, combined with the closing of the waterfowl farm in 1981, the Game Commission “switched management gears” and became more involved in improving duck habitat, rather than managing principally for geese.

Nevertheless, while duck hunting in the area has dramatically improved, gunning opportunities for resident as well as migrating geese continues to provide excellent fowling opportunities.

Management plans involving this chain of islands continue to change. Several years ago, the commission barge, which allowed farm equipment to move to and from the islands, succumbed to the ravages of time, so most current habitat improvements are accomplished by the sharecropping agreements.

Local Land Management Officer Dave Barrick advises that a replacement equipment barge will soon be available and the agency’s food and cover employees can intensify their habitat improvement activities.

In the past several years, another happening has accelerated goose hunting in the vicinity of the Susquehanna River islands.

While late winter and early spring snow geese hunting opportunities previously had been restricted to the vicinity of the Middle Creek Waterfowl Area in the southeastern part of the state, snow geese migrating north have been increasingly resting and feeding at other locations.  Huntable numbers of “snows” are being reported in the vicinity of the island chain, particularly adjacent to Haldeman Island.

WHAT YOU SHOULD KNOW: