Roseau, Minn. — Jan Johnson knew there was a big bear around. He just didn’t know how big it was.

On Oct. 1, Johnson killed a bear that tipped the scale at 700 pounds near Roseau. He was hunting on his parents’ property.

“I knew he was around,” said Johnson, 54. “I’d been after him, trying to hunt him out of a sunflower field. I was trying to get him between the field and river bottoms.” 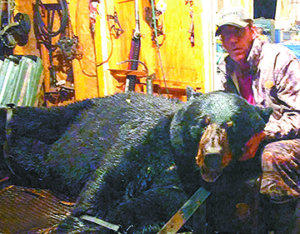 Johnson said he applies for the lottery bear hunt every year and hunts – as he was this season – on his parents’ farm in the no-quota zone when he isn’t selected in the lottery area.

He had been hunting several weekends of the season, which had been mostly dry in his area, until rain finally came and made it easier to find bear tracks.

“We had a heavy acorn drop, so baiting wasn’t an option until the acorns dwindled down,” he said. “I knew (the big bruin) was using a certain area for bedding.”

Within a 10- to 15-minute window, he had a flurry of bear activity at the bait site, right around 7 p.m.

First, two smaller bears came in for a few minutes.

“They tore out of there,” he said.

Then a sow with three cubs came in.

“They didn’t stay more than 30 seconds,” he said. “And that big one came in within a minute or so.”

Johnson was 25 yards away in a ladder stand he’d set up that morning over the bait, which consisted of cookies and honey.

He had a good feeling about hunting that day, though finding the right shot didn’t come as quickly as he would have liked, what with a tree obscuring his view.

Johnson dropped the bear in its tracks with his .270 rifle.

“I didn’t dream he was this big,” Johnson said, referring to his trail camera pictures, which made him think it might have been 500 to 550 pounds.

It took Johnson and two of his brothers 45 minutes to get the beast on a trailer and take it back to his parents’ house, where a small crowd, including his wife, parents, and a few neighbors, had gathered.

“Everybody’s mouth dropped when we pulled in,” he said.

There were two scales that each went up to 440 pounds, and the Johnsons used a hoist to stand the bear up on the two scales, with the front on one scale, and the hind on the other. The two weights added up to 721 pounds.

One of the Johnson brothers works for a grain elevator, and the Johnsons used the truck scale, which measures in 20-pound increments. On that scale, it measured 700 pounds, which is the same weight it would have shown for weights between 701 and 719 pounds as well.

The animal had a field-dressed weight of 602 pounds – using the double-scale method – which is far from official.

The heaviest black bear ever recorded is believed to be an 880-pound bear killed on North Carolina’s coastal plain.

And for that matter, there are no official record bear weights kept in Minnesota by the DNR. There’s a 60-day drying period before bear skulls can be measured, and Randy Dufault, a measurer with the Minnesota Official Measurers, out of East Grand Forks, Minn., intends to measure the bear skull when the time is appropriate.

“It did look like it has a big head,” Dufault said, pondering the chance that the bear could be a new state record.

Johnson said he’s had quite a bit of interest from everyone from outdoors writers to taxidermists looking for business, though he hasn’t decided what to do with the animal (the meat is already in the freezer and will be eaten).

With the help of one of Johnson’s dad’s neighbor, a former taxidermist, the bear was caped and is being ready to be tanned. It may be made into a rug or fully mounted.

“The wife figures it should be a rug. That way we can have a new house,” he said, noting that the 8-foot, 6-inch hide is too large for their living room.