Minnesota’s ruffed grouse spring drumming counts were up 57 percent statewide this year compared to last year, according to a survey conducted by the Minnesota DNR.

“The grouse population is nearing its 10-year peak,” said Charlotte Roy, DNR grouse project leader. “Grouse populations tend to rise and fall on a decade-long cycle and counts this year are typical of what we expect as the population nears the peak.”

Drumming counts are an indicator of the ruffed grouse breeding population. The number of birds present during the fall hunting season also depends upon nesting success and chick survival during the spring and summer. For the last 68 years, DNR biologists have monitored ruffed grouse populations. This year, DNR staff and cooperators from 15 organizations surveyed 122 routes across the state. 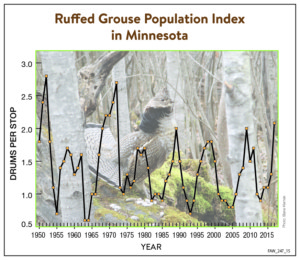 Drumming is a low sound produced by males as they beat their wings rapidly and in increasing frequency to signal the location of their territory. Drumming displays also attract females that are ready to begin nesting. Ruffed grouse populations are surveyed by counting the number of male ruffed grouse heard drumming on established routes throughout the state’s forested regions.

For grouse hunters, the large increase in drumming counts this year is sure to be a signal of good times ahead during the fall season, said Ted Dick, DNR forest game bird coordinator.

“We’re excited about the way things are looking,” he said. “We have more good grouse habitat than anywhere in the lower 48 states.”

Grouse hunters have a wealth of public land from which to choose. There are 49 ruffed grouse management areas across northern and central Minnesota that provide destinations for hunters in areas with good potential for producing grouse. There are 528 wildlife management areas in the ruffed grouse range that cover nearly 1 million acres and 600 miles of hunter walking trails. State forests, two national forests and county forest lands also offer many additional acres of public land for hunting.

“Grouse hunting need not be complicated and it’s another way to experience the outdoors in the fall,” Dick said. “Combine all that with our grouse numbers nearing peak and this is shaping up to be a great year to try grouse hunting for those who haven’t.”

To count sharp-tailed grouse, observers look for males displaying on traditional mating areas, which are called leks or dancing grounds.

“The average number of sharp-tailed grouse was similar this year compared to 2016,” Roy said.

The data on sharp-tailed grouse take some interpretation, because survey results can be influenced by how many leks are counted or changes in how many birds are at each lek year to year.

Comparisons of the same leks counted in both years indicate that counts per lek were similar to last year in both survey regions and statewide.  This year’s statewide average of 9.7 sharp-tailed grouse per lek was similar to the long-term average since 1980. The 2009 average of 13.6 was as high as during any year since 1980. During the last 25 years, the sharp-tailed grouse index has been as low as seven birds counted per dancing ground.

The DNR’s 2017 grouse survey report and grouse hunting information can be found at mndnr.gov/hunting/grouse.