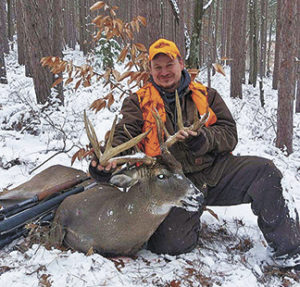 The buck was old.

Later, the hunter’s taxidermist would point out that the buck had nothing but stumps left in its mouth, feeble remains of the sound choppers it had in its prime, and estimate the buck to be at least 8 1⁄2 years old.

Yet on a snowy November afternoon, the buck was intent on finding romance. The simple act of looking for another doe to breed would start the clock ticking on the buck’s death knell.

But let’s back up a bit. For four long years, Kenny Judd, Cody Meyer and Don Meyer (all of Birch Run) had been pursuing the deer they called the Jim Judd Buck, named after the first hunter who first saw the buck in game camera photos. Last year, Don Meyer spotted the deer while hunting on public land in Lake County during archery season. But sadly, the crafty buck stayed safely out of bow range. During the 2016 archery season, the deer pulled a Houdini and seemingly disappeared. None of the 16 game cameras the Meyer hunting party puts out had captured the deer, nor had anyone spotted it during bow season. The only encounter anyone may have had with the whitetail came when a giant buck ran in front of Cody Meyer’s truck while he was driving home after bowhunting.

“None of us thought the buck was still alive,” Don Meyer told the Michigan Outdoor News. “We had a lot of conversations in camp about what happened to him.

Five days of the 2016 firearm deer season went by, and none of the hunters saw the buck. On the morning of Nov. 20, Don and Cody drove back to hunt camp to close it down for winter. Both decided to go hunting.

Don Meyer climbed into his treestand on public land at about 2:30 p.m., giving him plenty of time to settle in and prepare for the afternoon hunt. Meyer only hunts with a bow. The hunter didn’t have long to wait.

“After only about 45 minutes, I looked to my left and saw the buck come out of the woods in front of me,” Meyer said. “He was only about 10 yards away, and he had his nose to the ground scent-checking for does.”

The buck was so focused on locating a mate that it didn’t hear Meyer grunt at it to get it to stop. Finally, after grunting for the fifth time, the buck halted, and Meyer released his arrow. The shot proved to be lethal.

That’s when having another hunter in the woods to gather deer intel paid huge dividends for Don Meyer.

“Cody told me that about the time I shot, he saw what looked like a big deer fall and roll partly down a ridge about 150 yards away,” Meyer explained.

Meyers continued tracking the deer and found the J.J. Buck.

“I literally dropped to my knees when I saw him,” said Meyer. “My son and I then hugged, and then we started calling all our friends.”

The 10-pointer has a green score that grossed 166 2⁄8 inches, weighed 200 pounds on the hoof, and his Meyer’s biggest buck to date. He will have the entire deer mounted – a fitting way to not only celebrate the achievement, but to remember the old, love-sick buck.