In Bureau County, CPO Wagner, while checking hunters at Miller Anderson Nature Preserve, observed hunters who seemed suspicious in their behavior. While one hunter came out of the woods another seemed hesitant to come to the CPO. CPO Wagner yelled for the individual to come out. The hunter came out but had no gun and claimed he wasn’t hunting, only helping his friend. A short time later another hunter emerged from the woods and he also claimed not to be hunting. After a short interview with the three hunters, they confessed there was another gun hidden. CPO Wagner walked with the hunters to a creek bed where they had buried the shotgun under leaves. Multiple citations were issued for violations and the Mossberg 12-gauge shotgun was seized as evidence.

In Stephenson County, CPO Roesch and CPOT Kampmeier issued a citation to an individual for hunting over bait.

In LaSalle County, CPO Kaufman and CPOT Hahn responded to a call of an individual shooting squirrels in a local town. They met the complainant who said he watched his neighbor shoot two squirrels in his yard. CPOT Hahn made contact with the highly intoxicated neighbor. The neighbor admitted to shooting the squirrels. The man was issued a citation for hunting too close to a residence and two written warnings.

In Winnebago County, CPO Swanson made contact with a subject regarding illegal trapping at his residence where she found a dead skunk in a live trap that had been left for a week. The 53-yearold Rockford man was cited for failure to remove an animal from a trap and received written warnings for trapping without a license, trapping without a habitat stamp, failure to tag trap, and trapping within 100 yards of an inhabited dwelling.

In McDonough County, CPOs Elliott and Thompson completed an investigation into the Unlawful Take of an 11-point buck south of Macomb. McDonough County. It was determined the subject shot the deer at night with a .223 rifle utilizing an attached thermal scope from the roadway.

The subject received written warnings for the following violations: Unlawful possession of an illegally taken 11-point buck, Unlawful providing false information, Failure to report harvest, Failure to tag deer, and Unlawful transport of an uncased gun in a vehicle.

In McDonough County, CPO Elliott patrolled McDonough County for DNR Deer Enforcement. During a compliance check at Argyle Lake State Park, CPO Elliott determined the subject was hunting without his hunting license, habitat stamp, and permits in possession. Additionally, CPO Elliott identified the hunter had transported his compound bow and two crossbows uncased. Citations for Unlawful Hunting Without a Permit and Unlawful Transport of an uncased bow were issued. Written warnings were issued for the Hunting License and Habitat Stamp not in possession, the other uncased crossbows, and not having his windshield card number visible for inspection.

In Warren County, CPO Elliott and CPO Thompson responded to a complaint of trespassing in rural Warren County near Avon Ill. The complainant provided CPOs with photographic evidence depicting a neighbor crossing the property line on various occasions and hunting without permission.

CPOs watched the location the complainant alleged the trespasser was gaining access. While conducting a canvas of the location, CPOs located evidence of unlawful baiting of whitetail deer. CPOs made contact with the suspects at their residence. Upon interview the suspects admitted to trespassing, hunting without permission, and placement of bait for deer hunting purposes. CPOs issued three citations and several written warnings for the associated violations.

In Will County, while conducting deer hunting enforcement in western Will County, CPO Prasun observed a suspicious vehicle parked on private property. As CPO Prasun was attempting to locate the vehicle’s owner, he observed the owner wearing camouflage as he pulled up riding a camouflage ATV. It was determined the person was out riding the ATV on property he did not have permission to be on. The subject was cited for riding an ATV on the property without permission and was issued a written warning for unlawful possession of cannabis.

in Kendall County, Silver Springs State Park site staff found a vehicle license plate on a walking path leading back to a hunting area. CPO Bergland investigated and was able to determine the person responsible. That person was cited for the violation. 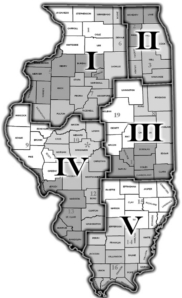 In Jefferson County, CPO Tapley checked a hunter at a hunting cabin. The hunter was found to have two untagged deer in his truck. The hunter was found to have permits belonging to another person in his possession. CPO Schoenhoff went to the hunter’s parents’ residence and spoke with them. CPO Schoenhoff discovered violations for each of the parents relating to deer hunting. Both parents told CPO Schoenhoff that they had killed the deer that the son had in his possession. The son told CPO Tapley that he had killed the deer. The parents were issued a citation each, the son was issued two citations.

In Cook County, CPO Hopper was given information on a long-standing case that resulted in the seizure of a crossbow, three cameras, and a 10-point deer rack. Several charges are pending.

In Cook County, CPO Hopper, CPO Vik and CPO Kusta arrested two individuals on the property without permission based on information from a TIPS report. Eight citations and multiple written warnings were issued.

In Kankakee County, CPO Elliot was contacted by a hunter who reported a cell camera being stolen on a hunting property near his home. A picture was taken of a male subject in full camo walking with a crossbow around the time the camera went missing.

CPO Elliot responded and met with the caller where a dirt bike was located hidden in the woods with a camo tarp covering it. Sometime later, CPO Elliot located the trespasser and he was cited for hunting without permission.

In Kankakee County, while conducting deer hunting enforcement in western Kankakee County, CPO Prasun determined a hunter was hunting without a habitat stamp. The hunter was issued a written warning for the violation. A second hunter was an out-of-state resident who was hunting deer with a resident hunting license and permits. He was cited for Unlawfully Deer Hunting Without a Valid Non-Resident Permit. A third hunter was found to be deer hunting over bait. He was cited for Unlawfully Hunting Deer Over Bait.

In Kankakee County, CPO Farber observed a subject in a black single-cab truck illuminate a cut cornfield with the intent to locate wildlife. CPO Farber conducted a head-on traffic stop on the vehicle and discovered that the violator had an uncased/loaded 12-gauge shotgun and spotlight in plain view within arms distance. The weapon was seized and the violator was issued five citations, along with a mandatory court date.

Citations issued included falsification of official DNR records, unlawful taking of a white-tailed deer, and unlawfully being in possession of another’s deer permits. An 8- and 7-point deer rack also were seized.

In Hancock County, CPO Wheatley responded to a call for service regarding a La Harpe woman harassing hunters on a neighboring property. Hunters explained that the woman was shooting fireworks into the woods they were hunting, along with dumping fabric softener out to scare deer away from the area.

CPO Wheatley has interviewed several parties regarding the incident as well as collected witness statements. Further investigation will occur in the coming weeks and charges are likely to follow pending the investigation.

In Pike County, CPO’s Jansen and Priest observed a vehicle spotlighting deer from a vehicle. A stop was made and a loaded handgun was discovered in the center console. An untagged deer was also discovered in the bed of the truck. The subject driving the vehicle was issued three citations.

In Clinton County, CPO Macias was called to Eldon Hazlet State Park about some dead deer near the roadway of the park camp areas. An investigation into the matter is ongoing.

In Madison County, CPO Wichern cited a bowhunter for hunting the north unit of Cahokia Mounds during the firearm deer season without a windshield permit.

In Gallatim County, CPOT Hubler and CPO Wilkinson wrapped up an illegal deer hunting investigation. A Gallatin County man was issued three notices to appear citations for unlawfully hunting by the use/aid of a vehicle, Unlawful take of whitetail deer, and criminal trespassing.

In Hamilton County, CPO Skelton along with CPOT Hubler, investigated a possible tag fraud case which occurred in Hamilton County. All the subjects involved were interviewed.

In Hardin County, CPO Williams cited a hunter for dumping in excess of 100 pounds of corn in front of their trail cameras on the last day of the second firearm season. The hunter explained they wanted to take stock of what deer survived.

The parents were issued a citation each, the son was issued two citations.