Indianapolis — An Indiana record that was held for 32 years has been broken twice in two weeks.

The survey, conducted in early 2022, shows the wolf population in the Upper Peninsula remains stable, as it has for more than a decade. 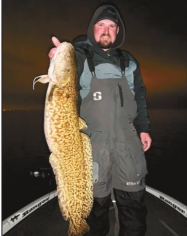 “These
results show a continued trend of statistical stability, indicating
that gray wolves may have reached their biological carrying capacity
within the Upper Peninsula,” said Cody Norton, the Michigan DNR’s wolf
specialist. “Wolf presence has only been confirmed twice genetically in
the Lower Peninsula in recent times, in 2004 and 2014.”

The
survey, which is conducted every other winter, covers the U.P., with
Isle Royale excluded. The wolves on Isle Royale are managed by the
National Park Service.

Completing
analysis of the field data collected during the DNR’s 2022 wolf survey
was delayed during the past year as wildlife biologists focused on
updating the state’s Wolf Management Plan.

The minimum wolf population estimate from the 2022
survey is 631 wolves, plus or minus 49 wolves. A total of 136 packs was
estimated, with an average number of individuals per pack calculated at
4.5.

“Our minimum wolf
population estimate is not statistically different from the last
estimate in 2020,” Norton said. “All of the estimates since 2011 have
not differed statistically.”

However, wolf density appears to have shifted over time.

“The
density of wolves may have decreased in some areas of the west U.P. and
increased in some parts of the east U.P.,” said Brian Roell, DNR
wildlife biologist.

This
may be linked to significant winter weather events during 2013-2015,
which greatly reduced deer densities in midand high-snowfall zones of
the region.

The growth rate was expected to decline as the population moved toward the maximum level the U.P. can sustain.

Since
2011, the minimum estimate for the wolf population has remained stable,
ranging from 618 to 695. A minimum of estimate of 695 wolves occurred
in the U.P. during the winter of 2020.

The legal status of wolves at both the federal and state levels has changed several times, which impacts the ability of all
agencies to manage wolves, the DNR says. Regardless of changes in legal
status, wolves in Michigan have surpassed federal and state population
recovery goals for 22 years.

Gray wolves are currently on the federal list of threatened and endangered species.

Consequently, they cannot be killed legally unless in defense of human life.

Honolulu
(AP) — Rescuers were searching last week for a fisherman in Hawaii who
went overboard from a boat after hooking a tuna, authorities said.

Mark
Knittle, 63, of Captain Cook, Hawaii, was fishing with a friend off
Honaunau on the Big Island on Jan. 15 when he hooked an ahi, or tuna,
police said.

“The friend heard Knittle
say, ‘The fish is huge,’ then saw Knittle go overboard into the water,”
according to a police news release.

The
friend tried to grab the line, but Knittle disappeared within seconds,
the release said. The friend jumped in but couldn’t see Knittle.

“Usually
our incidents like this are along the coastlines. This is a different
situation because it’s out in the deep,” said Darwin Okinaka, Hawaii
County Fire Department assistant chief of operations.

According to police, Knittle and his friend were 4 miles from the Honaunau Boat Ramp.

“If there’s a fish that’s actually pulling him around, you don’t know where he could go,” Okinaka said.