Located north of Detroit Lakes and entirely within the boundaries of the White Earth Indian Reservation, 2,000-acre White Earth Lake is a pretty straight-forward fishery.

White Earth contains a lot of walleyes and good numbers of quality smallmouth bass. In a nutshell, that sums up the lake’s top offerings for anglers.

While White Earth also holds some panfish and northern pike, along with a healthy lake sturgeon population, its walleyes and smallies are what anglers target most.

White Earth’s walleye population is robust and entirely self-sustaining, meaning the lake is not stocked. Based on a long history of DNR survey information, it doesn’t need to be.

Most recently, a 2020 targeted walleye survey showed what past DNR surveys have: an insanely high number of walleyes – more than 18 per gill net.

“It is a model of consistency for walleyes,” said Mike Habrat, DNR Fisheries specialist in Detroit Lakes. “We usually see between 18 and 25 walleyes per net. Most surveys, it’s over 20 fish.” 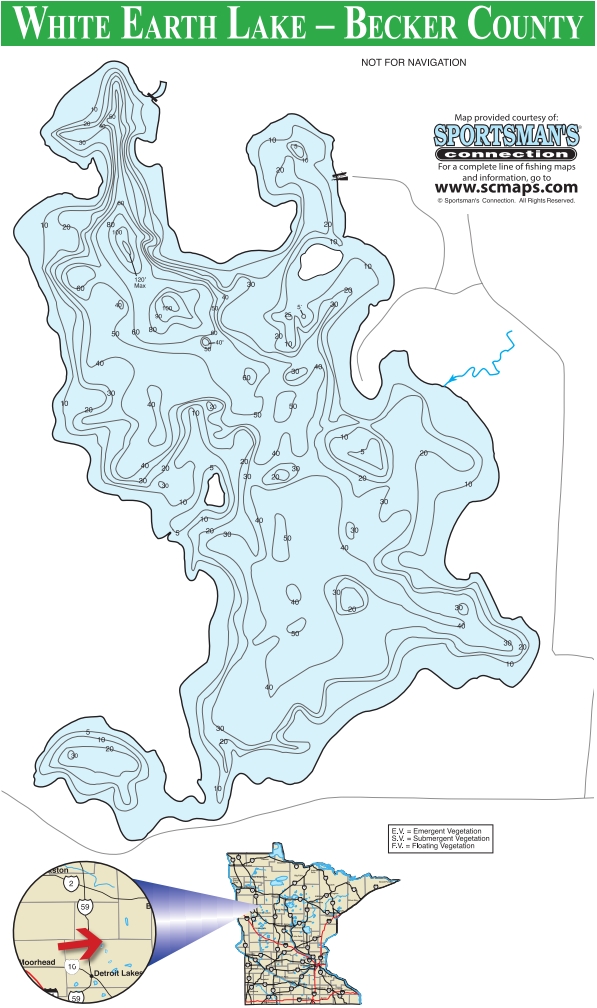 Highly successful natural reproduction occurs because of the lake’s ideal walleye-spawning habitat. White Earth is rich with gravel, boulders, and sand – all the right ingredients to produce consistent year-classes of walleyes.

Although walleyes up to 26 inches showed up in that 2020 survey, they are few and far between. White Earth’s history of strong walleye numbers traditionally consists of mostly eating-size fish, and that hasn’t changed.

In the past seven surveys, walleye length has consistently averaged between 13 and 14 inches. In 2020, they averaged 13 1⁄2 inches long, with a decent group between 16 and 18 inches as well.

“It’s an eater-size-type fishery, by no means a trophy walleye lake,” Habrat said. “White Earth has always been, and will continue to be, good for eaters.”

Mike Witt, owner of Quality Bait and Tackle in Detroit Lakes, says the lake’s walleyes don’t receive much fishing pressure during the open-water season and that winter fishing pressure is almost nonexistent.

But White Earth has its moments for walleyes, typically after Memorial Day. There’s a lot of deep water within its acreage so it tends to warm later in the spring, and that’s when walleye action starts to pick up.

“It really doesn’t get fished that hard, but it can be a good walleye lake in the summer,” Witt said. “It has a lot of 14- and 15-inch walleyes in it right now.”

Smallmouth bass have always been part of the mix in White Earth, but they really started showing up in bigger numbers during the 1990s. They’ve exploded since that time and currently provide a solid secondary angling option to the lake’s walleyes.

Smallies between 15 and 17 inches can be expected, there are plenty of shorter bass, and the occasional bigger fish is in the mix. White Earth also has largemouth bass – some nice fish, but limited numbers.

“A lot of people go there and specifically fish for smallmouths,” Witt said.

Northern pike numbers are light and the fish tend to run small, although Witt hears about a few bigger pike being caught from time to time.

Bluegill abundance is also limited, with some fish over 8 inches. Crappies are even more rare.

In 2001, lake sturgeon were stocked in the system, part of a cooperative effort between the DNR and White Earth Band. Although stocking ended in 2019, it was a highly successful project.

The current sturgeon population is well established, and fish up to 60 inches have been sampled. According to Habrat, anglers don’t typically target them, although a few incidental catches are reported.