By legislative fiat the 134th Ohio General Assembly has declared that fracking for oil and natural gas is “green energy” and must be allowed on state parks and other public lands, all of which has many state conservationists turning green and reaching for smelling salts.

Our state lawmakers fast-tracked a highly misleading Amended House Bill 507 – its title speaks of poultry chicks and food safety – through its post-election lame-duck session. Then they went home for the holidays. Provisions in the bill would mandate fracking in state parks and on other state-owned land such as wildlife areas, forests and such (nature preserves are specifically exempted).

The bill also prohibits local governments from banning pesticides, another ornament on this “Christmas tree” legislation.

Pete Bucher, interim president for the Ohio Environmental Council’s Action Fund, said in a statement that the Senate amendments to the bill are “nothing but political cronyism added at the last minute” by the oil and gas industry. 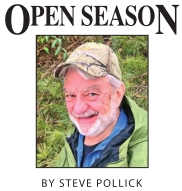 “These fossil fuel interest groups know major employers, public institutions, and the public support moving to clean energy and protecting our public lands, so they hid from a public debate and snuck these amendments in,” Bucher said.

Republican lawmakers embraced changes sought by the Ohio Oil and Gas Association. The bill vaguely defines green energy as an energy source that either releases reduced air pollutants or “is more sustainable and reliable relative to some fossil fuels.”

The Legislature dumped the bill in Republican Gov. Mike DeWine’s lap after a final legislative vote
on Dec. 13. At this writing, the governor had not announced whether he would veto it.

The state Senate originated 507, which is festooned with tack-ons, and the
state House of Representatives quickly concurred. Various conservation
and environmental groups were equally quick to roundly criticize and challenge it.

“The bill is egregious. The ODNR loses its authority (to regulate fracking)
to the oil and gas industry. As policy it is awful,” he said.

“The bill is plainly unconstitutional,” Johnson, an attorney, asserted. He
contended that the Ohio Constitution has a provision prohibiting
“logrolling,” a late-session political favors-trading tactic in which
unrelated provisions, perhaps unable to be passed on their own, are
rolled into one bill and blindly passed in bulk.

Johnson added that the amended bill would give free rein to oil and gas
companies, with few safeguards for competing public interests or the
environment.

Stephanie O’Grady, a spokesman for the Ohio DNR, told the media that the department didn’t
request the amendment regarding drilling at state parks but has no position on its merits.

Ohio law for more than a decade, dating back to the “Frackgate” controversy
in the Kasich administration, has said an agency “may” lease land for
oil and gas drilling. Amended H.B. 507, which passed both state houses
without any public testimony on its last-minute amendments, would change
that to say the agency “shall” lease the land “in good faith,”
according to an article in the Ohio Energy Network and Ohio Capitol Journal.

“The language change from ‘may’ to ‘shall’ changes the very basis of the
review process from leasing being permissive to being required. It takes
it from ‘You can do this’ to ‘You have to do this,’” Neil Waggoner told
the media outlets. He heads the Sierra Club’s Beyond Coal campaign in
Ohio, and with others worries about oil and gas operations in state
parks and forests.

“No one wants a fracking rig in a state park,” Waggoner said. “Gas is not
sustainable. It’s not clean. It doesn’t meet the definition of green
energy from the perspective of anyone who’s working in renewable energy.
H.B. 507 is just codifying a lie.”

According to Cleveland.com, Bill 507 seeks to push the Ohio Oil and Gas Land Management Commission
to stop dragging its feet on approving rules for oil and gas drilling on
state lands by requiring all state agencies to open up land they
control to drilling until the commission puts such rules in place.

In 2011, state lawmakers opened state parks to oil and natural gas
drilling and set up the commission to handle drilling applications.
However, the commission has been slow to approve projects and missed a
deadline last January to put leasing rules in place, the media outlets said.

Ohio’s production of natural gas has soared in recent years thanks to fracking
activity in eastern Ohio. As of 2020, Ohio ranked fifth among the states
for energy-related greenhouse gas emissions, according to federal data.

The full effect of designating natural gas – a fossil fuel that is mostly
methane, a powerful heat-trapping greenhouse gas – as a “green energy”
is uncertain. But green energy usually refers to renewable power sources
such as sun, wind, and water.

Indeed, it seems that the Ohio Legislature has signed on to a long-used tactic
of Big Oil called “greenwashing.” For Big Oil, it means using slick
marketing, sales, and advertising campaigns to portray to the public
that it is serious about climate change and environmental protection.
Serious lengthy investigations of greenwashing, and following the money –
Big Oil’s investments for coming years – show it all is a cynical
farce. Yet much of the public mutely buys into it.

Yes, we will need oil and gas for decades still. But automakers are not
investing billions in electric vehicles and the U.S. Department of
Defense is not opting openly for clean energy on a whim. Major power
transitions do not occur with the snap of a finger or click of a laptop
mouse. But they would happen more efficiently and beneficially (to the
climate and to humankind’s long-term comfort and survival) without
constant deceptions for the sake of fat profits in the short term.

To top it off, another Senate-added amendment to H.B. 507 would prevent
local governments in Ohio from banning the sale or use of
state-registered pesticides on private property. Ohio House Speaker Bob
Cupp, a Lima Republican, told reporters simply that the measure was a
“property-rights issue.” Maybe so, as long as the pesticides do not blow
off or run off that property.

A 2011 law created an oil and gas leasing commission and outlined a
framework for it to decide whether to grant permits for drilling and to
enter into leases through a competitive bidding process.

Lawmakers passed the bill, and Kasich signed it roughly a year before another law
opened the state to widespread fracking and horizontal drilling. That
eventually blew up into a controversy called Frackgate.

The Kasich and DeWine administrations were slow to make appointments to the
leasing commission. Which may have helped spur frackers to lobby
lawmakers for the changes. But the 2011 law leaves leasing issues up to
individual state agencies, with some limited drilling on state public
lands having occurred under current law. Some political subdivisions
have also entered into leases, including the Muskingum Watershed
Conservancy District.

Oil and gas companies “currently have the right to drill under state land.
But there is no deadline, there’s not a real expedited process by which
they can drill,” contended chairman Sen. Tim Schaffer, R, Lancaster,
chairman of the Senate Agriculture and Natural Resources Committee. His
committee discussed H.B. 507 on Dec. 6, and he claimed some proceedings drag on for years.

“It’s in current law that we can do this, and these drillers could do this,”
Schaffer said. “And it’s very strictly designed to make sure that we are
protecting the environment. We are protecting public lands.”

But language in the Amended H.B amendment appears to call for little more
than a showing of parcel identification and registration, proof of
insurance, and satisfaction of financial assurance requirements. A
legislative summary of the new bill language said it “requires, rather
than authorizes, each state agency to lease agency-owned or controlled
oil and gas resources for development prior to the date that rules
governing leasing procedures are adopted by the Oil and Gas Land Management Commission.”

Take note: These are the lawmakers who earlier this year attempted, in companion bills –
House Bill 282 and Senate Bill 171 – to designate radioactive fracking
waste as a commercial commodity, to be sold and used at will, including
as road deicing solution. Or peddled in jugs for your driveway and sidewalk.

This same Legislature decided it was OK to develop (read “destroy”) ephemeral
wetlands for the benefit of bulldozer developers in mining, drilling,
agricultural, logging and related interests. These intermittent,
top-of-watershed wetlands are the critical capillaries that feed the
arteries that are our streams and rivers – and Lake Erie. House Bill 175
nixed that, and the governor signed it into law, claiming that it
struck a “balance” between business and environmental interests.

So, will this controversy become Frackgate II? Will Gov. DeWine veto it?
Will a monkey-wrench magically be thrown into the political machinery?
Stay tuned.