Johnstown. Pa. — While other white-tailed deer were dodging bullets across the state, humans were heroes for a buck and two does rescued from a frozen Cambria County lake on the opening day of rifle season.

The buck, a six-point, and one doe lived, but a yearling doe did not survive.

The cervids were spotted, partially submerged and surrounded by ice, at about 11 a.m. Nov. 26 in the middle of Duman Lake in Barr Township. A concerned bystander called 911.

Members of the Cambria County Water Rescue Team from multiple volunteer fire departments, including Nicktown and Jackson Township, responded. Some had been hunting, but left the woods to answer the call.

The Pennsylvania Game Commission also was alerted, but was busy with an incident elsewhere.

“We all arrived at the lake, evaluated the situation and formulated a plan,” said Bryant
Greene, second assistant chief of Nanty Glo Fire Department. 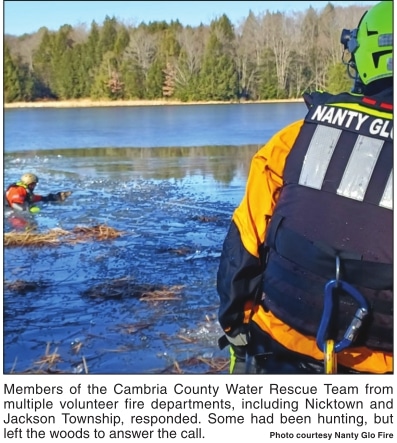 “It was obvious that they were very fatigued and needed assistance to get out of the water.

They couldn’t even stand.”

“Bystanders were there, too. Apparently the deer had been in the lake two, two and a half hours, and were extremely exhausted.”

A decision was made to approach the struggling cervids from both sides of
the lake, which required breaking through about 200 feet of
2-inch-thick ice, Greene said.

“All three deer were huddled together and, we’re not really sure, but it
looked like the buck may have been trying to hold up the two does.”

The boat nudged the buck and the smaller of the does closer to shore, but
they needed to be dragged onto dry ground as they were too weak to move
on their own, Greene said.

“It was obvious that they were very fatigued and needed assistance to get out of the water.

They couldn’t even stand.”

The animals’ respiration was high and their heart rate was up, and they
were showing signs of hypothermia. First responders covered them with
blankets in an effort to warm them.

Rescuers then focused on the other doe still in the lake. Using the same
tactics, they maneuvered her to shore, and she used her front hooves to
break ice, Greene said. 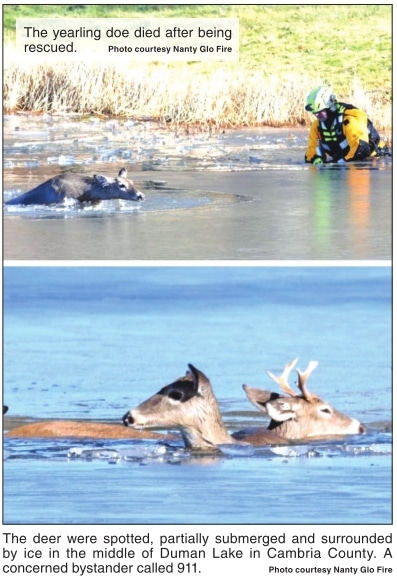 “She left on her own power and ran into the woods, so we figured that maybe
she’d entered the lake later than the others or had conserved her
energy.”

Members of Nicktown stayed long enough to see the buck regain his strength and disappear into the woods, but the yearling eventually died, Greene said.

This isn’t the first time Greene and his fellow firefighters have helped
save an animal, although Greene said he can’t remember ever being called
to rescue deer.

“Usually it’s the clichéd cat in a tree and once we had to move a shed to get to a dog that was trapped. We pull dogs and cats out of house fires and give them supplemental oxygen with special masks.”

It’s always gratifying, he added. “I don’t like to see animals in distress.”

Of course, people in distress keep him plenty busy. Greene, 40, is not
only certified in water rescue, he’s on the county’s HAZMAT team and an
emergency medical technician.

In his “day job” he’s a civil engineer.

He’s also a hunter, and it’s only because he’d just returned from an
out-of-town Thanksgiving visit with his sister that he missed this
year’s opening day of rifle season.

Not that it would have made a difference, he said, noting that several of his Nicktown colleagues left the woods for the rescue.

“It doesn’t matter when it is, when you do emergency services you go,” Greene said.