Home » Features » Profiles in conservation: A look at women’s groups in a male-dominated field

Profiles in conservation: A look at women’s groups in a male-dominated field

More women and girls are taking to the traditionally male-oriented outdoor sports every year. In fact, women now make up more than 25% of all anglers and represent the fastest-growing segment of the hunting and shooting communities. A generation ago, the reticence of some men to let women “tag along,” together with the scarcity of suitable outdoor clothing and gear, kept a lot of females from learning the basic skills that lead to a lifetime of outdoor pursuits.

That situation has changed dramatically, as many manufacturers now offer everything from hunting coats and shotguns to fishing waders and fly rods tailored to women. Spurring this revolution and helping to keep it going, a number of women-oriented conservation groups have sprung up during the past few decades. Let’s take a look at four of them.

Founded in 1991 by then-University of Wisconsin-Stevens Point professor Christine Thomas, Becoming an Outdoors-Woman has grown from its humble beginnings in Wisconsin into an international phenomenon and arguably created a wave of organizations devoted to introducing women to a wide variety of outdoor recreational pursuits, from hunting and fishing to boating, paddling, rock climbing, and more.

BOW got its start with a one-day conference entitled, “Breaking Down the Barriers,” held at UW-Stevens Point in August 1990. Speakers included Thomas, several Wisconsin DNR staff, and Fran Hamerstrom, a nationally known research biologist who studied under Aldo Leopold and wrote a dozen books, including the personal hunting memoir, “Is She Coming Too?”

“By 1995, the (BOW) program had grown to be offered in 26 states and Manitoba,” said UW-Stevens Point BOW Director Peggy Farrell. “At one point, BOW workshops were being held in 46 states and seven Canadian provinces.”

Women on the Wing

The newest conservation group for women, Women on the Wing, also got its start in Wisconsin. Founded in 2018, Women on the Wing is a conservation initiative of Pheasants Forever and Quail Forever that grew out of a “Women Caring for the Land” event held in Appleton, Wis., in 2015. That event, hosted by PF, the U.S. Department of Agriculture, and the Fox River Watershed Alliance, brought women landowners together with biologists and other experts to explore grassland habitat-improvement options.

Other workshops held at farmsteads across the state have focused on pollinator habitat, soil health, rotational grazing, and cover crops, with the goal of helping women farmers, ranchers, and landowners with financial and land decisions.

Then in 2019, PF and Wisconsin Farmers Union representatives were invited to share their success stories at the National Farmers Union Conference in San Diego, which was attended by women from New York to Hawaii.

Today, WOTW continues to provide opportunities for women to become engaged conservationists through local events designed to cultivate new sportswomen and create a community of women who will carry on the upland tradition and the PF/QU mission.

With chapters in nine states, WOTW continues to offer Women Caring for the Land workshops in partnership with the Women’s Food and Agricultural Network. WOTW also sponsors Women, Wine & Wild Game events for women who have an interest in sustainable food sourcing and hunting, or who simply have an affinity for the outdoors.

WOTW also hosts learn-to-hunt events and mentored hunts for pheasants, quail, and doves. Yuma, Ariz., WOTW Chapter President Catherine Thompson said, of the chapter’s annual Doves in the Desert hunt, “We started this in 2019 because we saw a need for women who wanted to learn how to hunt. We had upwards of 20 women, all completely new to the sport, join us in the event’s inaugural year, and we’ve been growing ever since.”

Reflecting on Wisconsin’s first WOTW Upland Bird Camp, PF R3 Coordinator John Motoviloff wrote, “What stood out was the lack of what is often dominant in traditional hunting camps. There was no talk about who shot the most birds or which had the longest tail feathers. There was no one-upping. Posturing. No my-way-orthe-highway pronouncements about the best dog, the best truck, the best gun, the best way to work cover. It was as if, for that moment, for that weekend, the old ways had been put aside, and that something new and fresh was growing, rising from the ashes.” 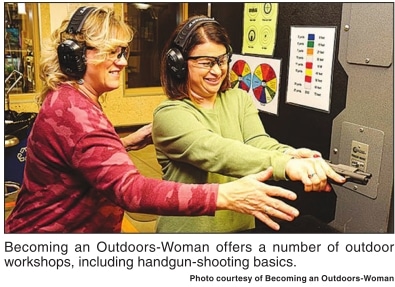 Women in the Outdoors

Seeing the demand for such activities for women, the NWTF expanded its outreach efforts to include a formal Women in the Outdoors program in 1998. WITO’s mission is threefold: to provide interactive educational outdoor opportunities for women; to conserve the wild turkey; and to preserve the tradition of turkey hunting.

To fulfill its mission, WITO teaches the importance of wildlife management, introduces women to outdoor activities, develops female outdoor educators, and provides a network for men and women to share outdoor interests.

The Rocky Mountain Elk Foundation has been supporting wildlife conservation efforts aimed at elk and other species since its founding in 1984.

Created in 2008, the RMEF’s Women for Wildlife program offers a variety of educational opportunities for women to learn about elk and other wildlife through workshops, seminars, and field trips. Participants gain a better understanding of the importance of conservation and the challenges facing wildlife populations.

The program’s goal is to foster the knowledge, skills, and opportunities to help women become both effective advocates for wildlife and wild places and leaders in conservation efforts.

The program hosts annual events and conferences where women can network, learn from experts, and participate in outdoor activities. WFW also provides financial support to conservation efforts through fundraising activities and grants.

WFW’s mentorship program pairs experienced female hunters and anglers with women new to the outdoors, providing a supportive environment where women can learn the skills they need to enjoy outdoor activities.

These organizations and others aim to empower women to take an active role in the conservation of wildlife and wild places, and to become competent in outdoor activities traditionally dominated by men. Through education, mentorship, and conservation efforts, these programs are all working to ensure that future generations may enjoy the natural world and participate in the hunting and angling heritage.