Hunters, during archery, muzzleloader, and the special firearms seasons, netted 1,447 bears, for a preliminary total harvest of 3,152 bears. 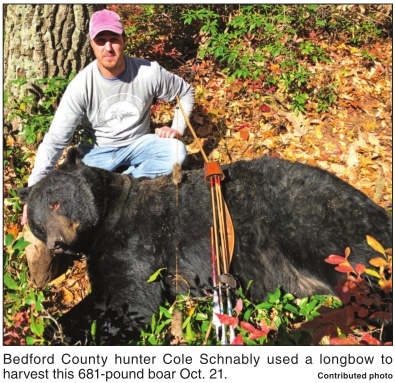 Another unexpected change occurred with the county harvest totals. Most years, it is just a question of which county will come out on top: Clinton or Lycoming, with Tioga often third.

This year, Tioga was on top with a harvest of 187 bears. Lycoming was second with 152, and Bradford and Luzerne tied at number three with 126. Clinton dropped to ninth place with 113.

“I got some friends to help, and it took us two hours to move the bear just 150 yards to an access road.”

Hunters harvested 10 bears
that had estimated live weights of over 630 pounds. At least three of
the top five bruins were harvested during the early seasons – seasons
that weren’t available 30 years ago.

Bedford County hunter Cole Schnably, a 34-year-old fiber optics lineman, used a
longbow to harvest a 681-pound boar on Oct. 21. Schnably specifically
targeted a mountaintop in the Buchanan State Forest during archery bear
season, because his trail cameras revealed both bears and nice bucks in
the area.

“I was sitting when I saw a large bear slowly feeding toward me,” Schnably
said. “When it was about 25 yards away, I took a shot, but the arrow
went under the bear.”

Much to Schnably’s surprise, at the sound of the arrow hitting leaves, the
bear backed up and started smelling the arrow. This gave him an
opportunity to nock a second arrow. This time his carbon arrow, tipped
with a Helix broadhead, flew true.

“The bear ran through the laurel for about 90 yards and died there,” Schnably explained. That is when the work started.

“I got some friends to help, and it took us two hours to move the bear just 150 yards to an access road,” he said. “I called the Game Commission for assistance. Even then, it was all that we could do to load the bear onto their carrier.”

Montgomery County hunter Timothy Moffett shot the third heaviest bear of the
season during the morning of opening day of the muzzleloader bear season
– Oct. 15. He was hunting in Monroe County when he dropped the
705-pound bruin.

A senior-junior hunter combo teamed up to harvest the fourth largest bear
of the season during the Special Firearms Season. Pequea Valley High
School (Lancaster County) freshman Elijah Smucker was hunting with his
grandfather Christian Smucker on his Potter County property near
Germania.

“I hunted in a treestand in the morning – only seeing a doe,” Smucker said. “We were
back out in the afternoon when my grandfather took a long shot at a
large bear. He connected and the bear went into the thick stuff.”

The elder Smucker got his grandson in his Gator and they drove to where the bear was last seen.

“I told Elijah to watch a clear path and I went into the thick fencerow to hopefully push out the bear,” Christian said.

“The bear jumped up out of the blackberries when I was just a few yards
away. Elijah shot four times with his .243 – knocking the bear down, but
it got up and went back into the thicket.”

The scenario repeated itself a short time later, with Christian jumping the
bear and Elijah shooting four more shots – again knocking down the
bear. They finished it off back in the thicket.

“I never knew that a bear could get that big,” Smucker said. “My friends
in school were so happy for me and asked a lot of questions.”

Although Elijah was happy and excited, the hunt was off the charts for his grandfather.

“It was just a great grandfather-grandson experience,” Christian Smucker
noted. “In fact, it was the best and most exciting hunting experience
that I have ever had.”

The Smucker, Moffett and Schnably bears were three of the heaviest five
bears taken during the 2022 seasons. Pennsylvania continued its
reputation for huge bears – hunters brought in a dozen with estimated
live weights of 600 or more pounds.

However, the total harvest of 3,152 bears was the lowest in 12 years, nearly 400
bears lower than Pennsylvania’s 15-year average.