Home » National Fishing » Choosing between rattle and flash spoons: Which one, and when?

Choosing between rattle and flash spoons: Which one, and when?

There’s more than one way to skin – catch, actually – a walleye, and it’s true that a variety of presentations can work well on a given day. Usually, however, there’s a better fish enticer for a certain water body, weather pattern, or depth range.

Often, certain fish species can be attracted to a lure or presentation based simply on their biology and what they like to eat. To make matters even more confusing, there are times of the year when one type of presentation will outperform the other based solely on metabolism and activity levels. Here’s a stab at sorting out what’s best and when.

Walleyes, perch, and even panfish love to eat jigging spoons, which come in a multitude of shapes and sizes. Yet for the most part, you can often separate them into two basic classes: rattle or flash spoons. 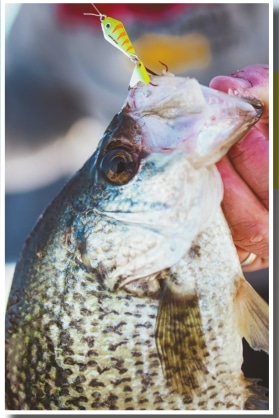 Yes, there are more types than this, but it’s safe to say that 80% of the spoon market fits into these two categories. That fact makes your job in selecting a winner just a bit easier, although there are a host of diverging classes within each the spoons that rattle and those that flash.

Rattle spoons are a class that relies on that rattle to draw fish in from distance, but not all rattle spoons are created equal. Most are heavy, lead spoons that serve as much as a dumbwaiter for bait delivery as they do a rattling presentation that’s meant to attract fish from afar.

These spoons are good for dropping to the lake bottom to create a “cloud” that may attract fish, along with the noise the spoons make underwater. Some rattles are made of metal, and now a new glass rattle option exists to really call fish from a long distance. Glass simply performs better to draw fish in, but there are times when a more subdued “tick” from the metal versions is better. Less can be more in some situations, especially during midwinter.

Flash spoons are a broader category yet, with the term “flash” being not limited to spoons that have a metallic or otherwise flashy appearance.

Flash, in this instance, can mean any spoon that attracts visually more than it does from an audible or felt-vibration perspective. Some of them tumble, while many dance and otherwise flutter seductively when dropped on a free line.

Color can play a huge role with this spoon type, given that they’re purely based on the visual, so it’s hard to cross this type of spoon off the list without trying a few standards from the fishing color wheel.

For this angler, and for others, it’s hard to imagine starting out with anything but a rattle bait of some kind. The advantages are numerous.

Fishing vertically, and stationary, you need to rely on drawing power to get fish from far distances to observe, and eventually eat your offering. Rattle spoons effectively do this, especially in murky water. They’re the perfect starting bait.

Speaking of bait, their appeal can be upgraded by tipping with a minnow head, plastic flicker tail, or both, creating yet another reason to use them first.

I’m of the opinion that it’s best to utilize rattles until the fish tell you not to, for a number of reasons.

I mentioned the calling power of these baits, but it’s also worth mentioning that the fish willing to respond to rattles are often in a more positive mood for feeding from the start. I’d rather drop an offering in front of an active fish than a neutral or negative one, and rattles have the power to attract those with an interest.

Truth be told, I’m a huge fan of those, too, but I realize that even fish that may be interested in these baits from afar don’t always strike them when up close and personal. That’s where the rattling spoons shine, however, because they tend to be a bit more snack-sized, and also subtle in comparison when it comes to their ability to fish “small.”

Tiny wiggles and shakes can be imparted to these baits to fish them in a more finesse manner than your average lipless crank, giving you the option to rip hard when attracting fish at a distance, then slow down to tease fish into finally eating.

Simple flash spoons have been tearing it up from the beginning of time, so for many anglers it’s a case of why fix what isn’t broken? Especially in clear water, there’s a distinct advantage to fishing a flash spoon, which has the ability to be even more of a finesse lure than the tiniest of rattle spoons fished slowly.

For clear-water anglers, it’s important to note that fish at a distance can see higher baits better, simply because of the angle at which fish are observing, along with the fact that they can more easily silhouette it against the light and/or the bottom of the ice.

Fans of these kinds of spoons often report fewer fish marked on electronics, but they tend to convert more of these marked fish into biters. That can make all the difference.