What’s more, the preliminary 2022 firearms deer-hunting season total of 71,932 animals exceeded the three-year average by 5%. And that gain was hardly unexpected or unwelcome by the Ohio Division of Wildlife biologists tasked with managing the state’s thriving herd of whitetailed deer.

“Overall, we had a solid deer gun season and harvest fell in line with pretty much what we would have expected,” said Clint McCoy, the wildlife division official who is pegged as the agency’s deer management primary care biologist.

Looking at the individual counties, McCoy said those hit hardest with epizootic hemorrhagic disease (EHD) were among the season’s casualties.

Also, the three counties in the wildlife division’s so-named chronic wasting disease “Disease Surveillance Area” likewise came in with lower gun season harvests. This drop is “most likely due to the fact that many hunters had already filled some tags during the early, three-day gun season that was held in those counties in early October,” McCoy said.

“On the other end of the spectrum, three northwest Ohio farmland counties saw the most significant bumps in the gun season harvest,” McCoy said.

Similarly, said McCoy, the three counties that increased from one-deer to two-deer this year “were also up significantly.” 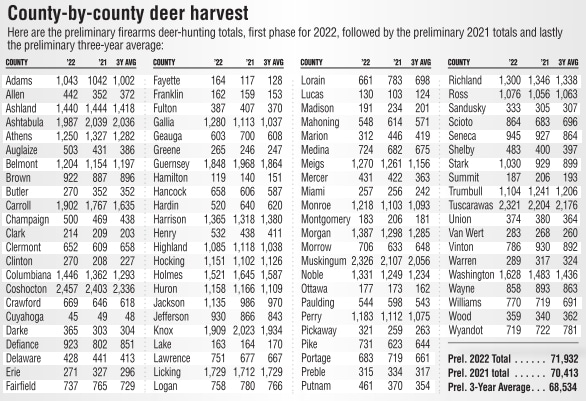 The situation was a bit different in Northeast Ohio’s fabled Snow Belt region. Opening day
saw large swaths of lake-effect cold drizzle that would turn to rain and
back again. And Saturday saw near gale-force winds across a good
portion of this region.

Not surprisingly, the counties of Lorain, Cuyahoga, Lake, Ashtabula,
Geauga, and Trumbull all experienced slippage in their respective 2022
deer kills verses their 2021 deer kills.

“And 33 counties ended up pretty similar to recent seasons, being up or down
less than 5%, while 11 counties had a gun season harvest that was at
least 5% lower than their respective averages,” McCoy said.