Home » Illinois » Former Pyramid State Park superintendent made his mark on site: ‘It was a dream job’

Former Pyramid State Park superintendent made his mark on site: ‘It was a dream job’

Pinckneyville, lll. — In 1968, about 950 acres of strip cuts and waste piles located off Route 127 south of Pinckneyville were ceded to the State of Illinois. The area was named Pyramid State Park.

Since that time there have only been three site superintendents at Pyramid. The third, Cha Hill of Du Quoin, retired Oct. 1. Dave Phillips and Bob Shaw were his predecessors. 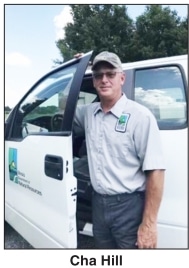 What had been a small park catering to hiking, horseback riding and fishing, became the largest state park in Illinois when the state accepted thousands of acres from Arch Minerals Company in 2001. Pyramid State Park now encompasses 19,701 acres.

“It wasn’t even all open to the public at that time,” Hill said. “By the spring of 2002 we had the roads fixed good enough for travel. We opened up all the units. Then we eventually started putting in, through DNR and federal grants, boat ramps on some of the larger lakes. There wasn’t even access to some of those lakes.”

And there weren’t even fishable populations in some of those lakes. Hill said stocking Goldeneye Lake with muskie was a memorable event. DNR employees had to walk 100 yards through rough terrain, carrying five-gallon buckets of muskie fingerlings to the water’s edge.

“Field trials are a big part of Pyramid,” Hill said. “Our facilities were pretty nonexistent, but the basics were there. With the help of Dr. Bill Roe, who took a big interest in Pyramid, he started the Friends of Pyramid. When he first started talking about it, Doc Roe hit the ground running and raised money. We put in a mile of water lines with about 20 spigots for field trials. We had to haul water from the shop out there and pump it in containers. That really helped out the field trialers.”

The field trial area now contains a barn with 32 stables, a building with meeting rooms, and a kitchen and a campground with electrical hook-ups.

Hill also oversaw the construction of wetlands for waterfowl hunting.

“It was a diamond in the rough when they first started, but it’s starting to shine now,” Hill said. “A lot of it has to do with Dr. Roe.”

Amazingly, many of the improvements were made when the state endured one of the worst financial times in its history. Funding for DNR was nearly non-existent. Creditors would no longer sell fuel to the parks. Park personnel installed wood burning stoves to heat headquarters buildings and garages.

“We had a backhoe repossessed we had leased,” Hill said. “Just things you needed, you couldn’t go out and buy antifreeze if you needed it. Our budget at Pyramid has improved over the years.

“It was just about all we could really do, was trying through the summer just to keep the grass mowed and the bathrooms cleaned. There was no extra improvements you wanted to do. We were on a bare-bones budget. It was tough.”

But a bigger, better Pyramid State Park emerged on the other side of those dark times. Visitation at the park varies from year to year, but is in the 200,000 range.

“It was a dream job,” Hill said. “Any job has its headaches. Most people that have been in a position for a long time have had ups and downs. The ups sure outweighed the downs for my part.

“I’ve always been an outdoorsman, I love to hunt and fish. When you can go to work every day and be outdoors and make improvements to a place as special as Pyramid, and just see it grow over the years. It’s just pretty satisfying. It’s really a dream job for people who like to do things I like to do.”