Leelanau, Mich. — Warm, pleasant weather is ideal for camping, but not so much when the campers are hunting on North Manitou Island, a wilderness island off the shores of Leelanau County in northwest Lower Michigan.

Orange-clad hunters reported seeing fewer deer, and statistics kept by the National Park Service (which manages the island) show that the buck harvest this year fell by 50% for the eight-day island firearms season, which ended Saturday, Nov. 5.

“It was too warm,” said Andy Bailey as he loaded camping gear in the parking lot of the Leland Harbor. “That put the stopper on the rut. And then the wind kicked up.”

Antlers and venison are only two reasons to hunt on the remote island.

“North Manitou just grabs you,” said Brian Zaryczny of Lake Leelanau, who despite less-than-optimal hunting conditions shot a 7-point buck on Nov. 3. “Every year you see big bucks, bigger than you’ll see on the mainland in (Sleeping Bear Dunes National Lakeshore). But it’s a hard hunt.”

Compared to 2021, the island, which is part of the Sleeping Bear Dunes National Lakeshore, was quiet this year. Some 207 Manitou hunters bagged 99 deer, of which 51 were males. Included were three button bucks, 10 spikes, and six 3-points. On the large side, 10 8-points, five 9-points, three 10-points, and one 11-point also were taken, according to statistics provided by Lakeshore Chief Ranger Phil Akers.

Jim Munoz, captain and co-owner of the Mishe Mokwa Ferry that transports
most hunters to the island, believes hunter harvest plays the biggest
role in herd size. He said the island provides near-perfect conditions
to host a trophy hunt, during which only larger bucks, does, and fawns
would be shot.

“There should be a point restriction over there, and maybe a
one-buck-to-one-doe ratio,” he said. “Talking with hunters, there are a
lot of guys who want a trophy hunt … the park service doesn’t manage the
deer herd. They want to manage the vegetation because they want the
island to be rid of deer.”

Park staff have little appetite for putting harvest restrictions on a hunt that has proven popular. 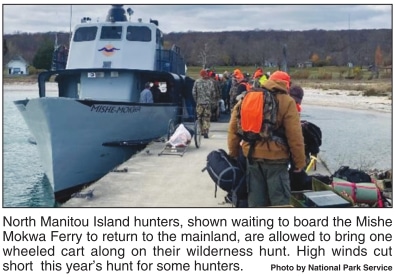 “We’ve
been working with an unlimited take, and so far it appears to be
successful,” ranger Akers said. “You are going to have years of boom and
bust. Last year was a boom year and this year it dropped a bit. You
can’t have a record year every year.”

A bit of history is needed to understand the laissez faire policy. Deer were moved to the island in the 1920s by private landowners who
artificially fed the herd and sold hunts. By the time the Sleeping Bear
Dunes National Lakeshore was established and the National Park Service
gained possession of North Manitou in the 1980s, deer were starving by
the hundreds. Artificial feeding had ended.

Whitetails had eaten themselves out of browse, and the saying – that at ground
level you could see across the width of the four-mile by eight-mile
island – held a portion of truth. The only known case of deer turning into
carnivores occurred on North Manitou beaches when rib-flanked whitetails
tried to survive on piled-up alewife carcasses.

When North Manitou was first opened to hunting a lottery was needed to
manage hunter numbers after thousands applied for special licenses.
Hunter enthusiasm cooled after the deer herd dwindled, but island
undercover returned with a vegetative vengeance. Since then, deer
numbers have ebbed and flowed but remained relatively low.

One draw to the North Manitou firearms hunt is that deer taken are tagged
with a NPS license and do not count toward DNR bag limits on the
mainland. State tags are used during archery season on the island, which
has few takers.

Hunter participation moves according to past success. Only two deer were
killed in 2005, which continued a steady decline of hunters to a low of
26 in 2008. After the banner 2021 season, participation in 2022
represented the first time since 1999 that more than 200 hunters made
the trip.

Akers said consideration will be given to having two firearms hunts in 2023 to spread out hunter pressure.

Gale-force winds that arrived toward the end of the 2022 hunt forced some hunters to move their camps. Others left the island.