Conditions for pheasant broods point to positive season in Illinois

Springfield — Illinois is sometimes overshadowed by its western neighbor Iowa when it comes to pheasant hunting. But in areas with quality habitat complementing agricultural production, there are roosters to be found in the Land of Lincoln.

Winter conditions in Illinois were just about ideal for pheasant survival, and spring conditions were equally as encouraging, according to Jason Bleich, a former Pheasants Forever team member and current private lands biologist with the U.S. Fish and Wildlife Service Partners for Wildlife Program.

“For the most part we had a really mild winter here in Illinois,” Bleich said. “We had a little bit of snow in February, but I really wouldn’t expect the winter to have affected our bird numbers going into the breeding and nesting seasons.” 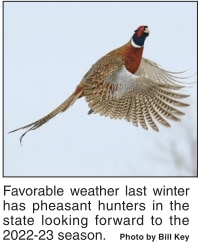 Spring brought additional good news, with excellent brood rearing weather
across the state. Early rains or flood events can harm nesting and brood
survival, and in recent years Illinois has seen those kinds of storms
in areas that traditionally hold pheasants. But this year much of the
rain held off until later in the summer.

Between 2014-2018, USFWS and other partners in Illinois planted between
150,000-200,000 acres of CP42 pollinator habitat across the state,
according to Bleich. Those acres have now had time to get established,
and are producing excellent cover.

Brood numbers on existing habitat this spring have been good, according to Wade Louis, a habitat team program manager for DNR.

“We’re slightly above average for pheasants and right around average for quail,” he said.

For hunters heading out in Illinois this fall, the east-central portion of
the state should be an area of focus, according to Bleich.

“To be a little more specific, Ford, Iroquois and Livingston counties are
kind of the heart of the Illinois pheasant population,” he said. “But
more broadly, there’s probably about eight to 10 counties in
east-central Illinois from Champaign up to Kankakee where we still have
pretty good bird numbers, and where a guy can go out, knock on a few
doors and get permission to shoot some birds in the fall.”

Hunting hours are sunrise to sunset, with a bag limit of two roosters per day in both the north and south zones.