Before we get to news regarding Evergreen Lake’s emerging largemouth bass population, let’s point out the documented fact that state record saugeyes and muskies are roaming the 925-acre McLean County water. 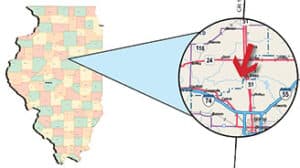 To wit: During DNR’s sampling of the lake in 2021, biologists collected a saugeye weighing in at 10.2 pounds. The current state record is a 9.68-pounder caught way back in 2001.

What would be a record muskie also was collected by DNR.

It’s also important to note that the recent 10.2-pound saugeye isn’t even the largest DNR has sampled – In 2018, the agency weighed one at 10.6 pounds.

During DNR’s 2021 spring netting survey, five saugeyes were collected per net-night, a tick below th average of 5.5 per net-night. Of the saugeyes collected over 10 inches, 100% were longer than 14 inches and 49% were more than 18 inches.

There is a three-fish, 18-inch minimum length limit for saugeyes at Evergreen.

As for bass, DNR is reporting that 21 fishing tournaments were held on Evergreen in 2021. In all, 350 largemouth bass were caught in those events, with many of them weighing in above the 5-pound mark. The largest bass came in at 6.46 pounds, with two others topping the 6-pound mark.

The lake’s muskie population continues to hold its own.

According to DNR, muskies larger than the current state record of 38 pounds, 8 ounces were collected during spring netting surveys of Evergreen in 2006, 2007 and 2010.

Which is why it’s no surprise that state fisheries biologists have looked at and predicted “the next state record muskie could come from Evergreen.”

The largest muskie collected was just under 48 inches and weighed 39.3 pounds – above the current state record of 38.5 pounds.

A big part of the muskie success at Evergreen has been the result of past work put in by the Illini Muskie Alliance, avid muskie anglers and local volunteers. One example is the project by the McLean County Parks and Recreation Department, which worked with local anglers to erect a barrier below Evergreen’s spillway to lower the escapement potential of muskies downstream.

Evergreen has a 48-inch minimum length limit for muskies.

The crappie fishery was once dominated by white crappies, but since 2006 the black crappie population has been more prevalent in fish surveys and anglers’ creels.

Smallmouth bass, once native to Evergreen, have been stocked. Survey numbers were not significant, DNR noted.

Stocking efforts so far in 2022 include 1.3 million saugeye fry and 56,000 saugeye fingerlings.

Largemouth bass also were stocked this year, with 282 adult bass put into the lake.

Evergreen Lake is part of Comlara County Park. It has an average depth of 19.7 feet and a maximum depth of 50 feet. There are two boat launches on the lake and one canoe launch. Comlara County Park offers 137 campsites, a swimming beach, and showers.

The Friends of Everbloom is an organization that assists with habitat projects and improving the lake’s quality.