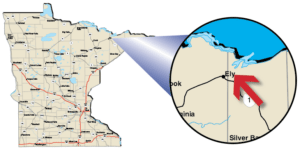 There aren’t a lot of lakes that hold good numbers of quality crappies in the Ely area, but Garden Lake does.

Located within the popular White Iron Chain of Lakes and fed by the Kawishiwi River, 653-acre Garden is the northern-most fishery in the system, which includes Farm, South Farm, and White Iron lakes.

While slab crappies swim the entire chain, Garden usually receives the least amount of fishing pressure for them. There are times – late ice and early spring – when they receive a bit more attention, but it’s pretty rare to encounter big crowds of crappie anglers. But when you find these fish, they are nice-sized.

“You just don’t catch many small crappies out there,” said Steve Renneberg, of Arrowhead Outdoors in Ely. “You see a lot of those 11- to 13-inch fish, but there’s a great shot at a 15- or 16-inch crappie, too.”

While bluegills aren’t nearly as abundant as crappies, Garden does hold some nice ones. The other lakes in the chain tend to have greater numbers, but the bluegills you encounter from Garden are typically quality fish.

Bluegills over 9 inches and in the three-quarter-pound range or above are caught from Garden. One thing is for sure: its panfish definitely make Garden a destination lake in the area.

“It has a reputation for crappies more than bluegills as far as overall abundance,” said Brent Flatten, DNR assistant fisheries supervisor in Tower. “But they both run good-sized, and it’s a lake people know they can catch nice panfish on.”

Garden kicks out some girthy northern pike as well. The entire chain actually produces large pike, thanks to a healthy forage base in the way of tullibees.

In addition, there’s been a special northern pike regulation in place since 2003 on Garden. It protects pike from 24 to 36 inches and allows anglers to keep one fish over 36 inches in length.

That also seems to be maintaining and improving the quality of pike in the system. The number of northern pike over 30 inches in length has been noticeably higher in the most recent DNR surveys of Garden.

“The regulation has helped, tullibee numbers seem to remain consistent, and I don’t think there are a ton of pike harvested by people,” Renneberg said. “It’s more quality than quantity. It’s absolutely possible to catch a pike over 40 inches out there.”

While its panfish and pike shine, Garden’s walleye-fishing opportunities are less of a draw. The cupboard isn’t empty, but it’s well known that the other lakes in this chain tend to produce more walleyes.

During the past two DNR surveys, in 2012 and 2017, gill nets averaged about three walleyes per lift. The lake is stocked with walleye fingerlings during odd-numbered years, and some limited natural reproduction does occur.

There has been a 17- to 26-inch protected slot for walleyes on Garden since 2006 that seems to have moved the needle upward a bit as far as numbers. But the walleyes sampled in 2017 averaged just under 12 inches in length – a benchmark that takes about five years of growth to reach. In simple terms, these are slow-growing walleyes.

“There aren’t great numbers, but you can get a meal of walleyes under 17 inches,” Renneberg said. “Expect more eaters than big walleyes from Garden.”

Smallmouth bass are present, it’s by no means a numbers game on Garden. However, the lake does produce some big smallmouths.

The Ely area is loaded with fine smallmouth bass lakes, which provide better angling opportunities. For that reason, Renneberg said he doesn’t hear as much about the smallies in Garden as he does about those from other lakes.