Anglers stay busy with panfish and bass on Grass 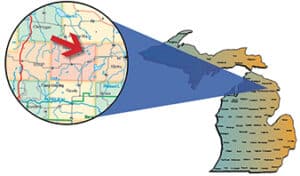 “The Grass Lake panfish community is high-quality with good species diversity. Species available to anglers include bluegill, pumpkinseed, black crappie, rock bass, and yellow perch,” Tim Cwalinski, senior fisheries biologist with the Michigan DNR wrote in a summary of the most recent survey of the lake. “Fishing pressure appears high at Grass Lake, but the abundance of year-classes and good spawning habitat will enable such harvest to be sustained over time.

“Black crappie appear abundant at times, probably based on high water events coupled with good spawning success. This fish adds to the diversity of catches as do rock bass. Yellow perch are present but typically small in size.”

Grass Lake is a 382-acre flooding located approximately 10 miles northwest of the town of Hillman, in northeastern Montmorency County. There are several small inlets and Grass Creek is the only outlet on the lake. Grass Creek flows into Long Lake, which is part of the North Branch Thunder Bay River watershed.

There’s a small dam at the east end of Grass Lake, which was established in 1937 and created Grass Lake flooding. Today it’s owned and operated by the Grass Lake Association.

Grass Lake is shallow and sustains a good amount of aquatic vegetation. The deepest hole in the lake is just 10 feet along the island in the north-central region of the lake. According to the DNR, this depth was recently recorded and slightly contradicts the deepest point documented in early lake maps. The majority of Grass Lake is less than 4 feet deep. It features a muck bottom with limited amounts of sand and gravel.

Cattails and sedge hummocks are common in Grass Lake.

Shoreline development is minimal as more than half of the lake rests in the Mackinaw State Forest.

Historical information on the fishery in Grass Lake is minimal. A fish community survey following a partial fish winterkill was completed in 1961 by the Michigan Department of Conservation. Panfish and northern pike were common at the time while largemouth bass and minnow species were nearly absent. The lake has been surveyed several times since then and the fishery has largely remained stable.

Notes from the most recent survey indicated that there are a lot of native clams in the lake. In addition, both bald eagles and osprey were seen over the lake and in nests, while common loons were abundant.

The most recent survey of the fishery in Grass Lake found 13 species of fish totaling 1,378 individual.

Bluegills were the most abundant species found in the survey. They ranged in length up to 9 inches.

“Many quality-size fish are available to anglers and angler reports have indicated the presence of bluegill up to 11 inches in length,” Cwalinski wrote. “A high percentage of 6-inch and larger fish comprise the total bluegill population based on the catch in trap nets.”

The survey also turned up good numbers of pumpkinseed sunfish to 9 inches.

“Pumpkinseeds are also abundant in Grass Lake,” Cwalinski wrote. “This species, which is often targeted simultaneously with bluegill by anglers, was the second-most common fish by number in the survey catch. Like bluegill, they were found up to 9 inches in length and were abundant in the 7 and 8 inch range.”

The survey also produced good numbers of large-size black crappie ranging between 10 and 13 inches. However, there was a lack of smaller, younger crappie. Most of the crappie catch in the survey were age 7 to 10.

“Black crappie appear abundant at times, probably based on high water events coupled with good spawning success,” Cwalinski wrote. “This fish adds to the diversity of catches as do rock bass.”

Good numbers of rock bass and yellow perch, both ranging up to 8 inches, were collected in the survey.

“The main predators of Grass Lake are largemouth bass and northern pike,” Cwalinski wrote. “Largemouth bass of a variety of sizes and ages can be found and are vital in helping balance the panfish community through predation. Based on survey results, this species should afford anglers a quality fishery. Northern pike densities are not high in Grass Lake, but they are present and can be caught by anglers, probably mostly in the spring and winter fisheries, which are known popular fishing periods.”

Northern pike regulations on Grass Lake have bounced around on over the years. Currently northerns are managed with the standard 24-inch minimum size limit and daily bag limit of two fish.

A public-access boat launch is located on the south shore of Grass Lake. It features a concrete ramp, which is maintained by the Michigan Department of Natural Resources Parks and Recreation Division. This access site has parking for approximately eight vehicles with boat trailers.