Alliance, Ohio – Berlin Lake in northeast Ohio is unique in many respects, and the fishing here offers a smorgasbord of species. 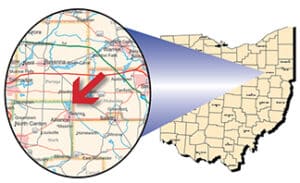 The 3,278-acre lake is one of the few in Ohio where muskies naturally reproduce. In fact, muskies have never been stocked by the state at Berlin.

It’s also one of a handful of inland lakes where walleyes are stocked.

The U.S. Army Corps of Engineers completed the dam on the Mahoning River in 1943, impounding the acres for the purpose of flood control. The corps maintains the Mill Creek Recreation Area, located on the east side of the lake. There are picnic areas, shelter houses, day use areas, campgrounds, and a boat ramp.

“Certainly, it’s one of our primary fisheries in northeast Ohio,” said Curt Wagner, fish management supervisor for the Division of Wildlife in Akron. “ … Lots of recreational use. In the summer it gets a lot of pleasure boaters but also anglers, too … The other big thing with Berlin is that its water level fluctuates widely due to some various downstream regulatory mandates.”

The aforementioned walleyes are a popular draw, but the fishing for them has been better in the past, Wagner said.

“In 2018 we netted Berlin for walleye and already then we were seeing indicators of size going up and our numbers going down a bit,” he said. “We were just not seeing those 1-, 2-, and 3-year-olds coming up.

The Division of Wildlife stocks both fry and fingerling walleyes in Berlin every year and there’s some natural reproduction in the background. It’s just been a tough go over the past several years, said Wagner.

Largemouth bass just a few years ago was rated excellent by the Division of Wildlife.

“The bass population just stays pretty steady,” said Wagner. “Largemouth and smallmouth have a lower average density compared to some of our other lakes but it’s steady and provides good fishing. There’s good size structure of the fish.”

Smallmouth bass are also present in fairly good numbers. Most smallmouths are incidental catches by walleye fishermen and shoreline casting bass anglers fishing rock points and rip rap. There is good smallmouth shoreline with plenty of rocks and drops at the south shore, west of the Highway 14 bridge, according to Fishing Ohio.

“We have a really nice size structure of smallmouth (at Berlin) right now,” Wagner said.

Both black and white crappies are annually captured during fall trap-net surveys.

“Crappies have really been a standout for the past 10 or 12 years on Berlin,” Wagner said. “Just gobs of big fish. That’s my go-to in the spring … because you know you can go there and catch crappies rather easily and they’re going to be of good size.”

There is a 9-inch length limit and daily bag limit of 30 crappies at this lake.

Channel catfish also fare well in Berlin, although they don’t typically grow to large sizes. These fish are also not stocked, but reproduce naturally.

“It’s not a lake that we stock (with catfish),” said Wagner. “It’s a big enough lake that we rely on natural reproduction.”

White bass are also numerous, and can particularly be caught when they run in the spring. It gets a good run of fish up the Mahoning River.

Berlin Lake is the only inland impoundment where natural reproduction of this species has been documented to any degree, according to the Division of Wildlife.

But, the muskie population has fallen on hard times as of late as well.

“Muskies were quite abundant in the 80s, 90s, and early 2000s,” Wagner said. “Beginning around 2013 or 2014 we started to see the sort of stair-stepping decline of muskies almost in perfect unison with an increase in northern pike … Something functionally ecologically is happening there with a complete flip-flop between muskies and northern pike.”

Below the dam at Berlin is an excellent tailwater fishery for smallmouth, walleyes, and catfish. Fishing for walleyes is best during spring and periods of lake releases.

The Division of Wildlife on its website has an interactive map on its website that includes coordinates for all of the structure that has been placed in Berlin.

The Division of Wildlife a few years ago dedicated a new boat launch on Berlin at German Church Road. It includes a large lot for boats.

“It has lots of shore access as well off the (Highway) 224 causeway,” Wagner said. “The other shoreline is on Army Corps or Division of Wildlife managed land. So, there’s plenty of shoreline access.”

Further upstream from Berlin, the Division of Wildlife has stocked some waters with hybrid striped bass. Those fish, in the meantime, have worked their way back through the system to make for a fishable population of wipers in Berlin, Wagner said.

“The folks who fish for white bass are starting to catch hybrid striped bass now,” he said. “I would say there’s a viable population (of wipers) in Berlin.”

To reach Berlin Lake, take Highway 225 just north of the city of Alliance.

Not only did Scott talk me into hunting two to three miles back in the woods, but also riding mountain