Lake of Egypt’s crappies a cold-weather option for anglers 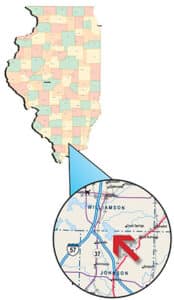 If there’s an ideal winter fishing spot for anglers who aren’t charmed by ice fishing, it has to be Lake of Egypt, a 2,300-acre reservoir and power plant cooling lake in Williamson County.

The lake, a well-known crappie producer, is privately owned, so DNR does not do fish surveys. The only way to learn about the fish population is to rely upon local anglers for information.

Physically, the lake is built for fish. Milfoil and other weed vegetation are abundant along the shoreline to a depth of about 8 to 12 feet. Warm winters allow the food and vegetation to survive.

The forage species in the lake are gizzard and threadfin shad. With the warm water temperatures all year, the threadfin shad do well in this lake contrary to the experience in other southern Illinois lakes which will freeze over, or in the least, are too cold for the fish to survive. Because of their size (less than 3 inches in length) the threadfin are the forage of choice for crappies.  The gizzard shad grow much longer and become the food for the largemouth bass and other predators.

The lake has approximately 93 miles of shoreline, with an average depth of about 18 feet. The maximum depth is 52 feet.

Local fishing guide Kyle Schoenherr fishes the lake often. He finds the size of crappies to average around 12 or 13 inches in length. Both black and white crappies are present. Locals do report catching an occasional hybrid.

The crappies tend to hold in the 5- to 7-foot range of water, moving shallower to spawn. The fish follow creek channels. Any place where the creek channel crosses a point, conditions are good for finding fish. In deeper water, the fish tend to stage in a pre-spawn pattern.

Other good areas to explore include weed beds found on the flats in center of the lake. Again, the best action seems to come in 7 to 15 feet of water early and late in the day.

The early bass season on Lake of Egypt begins around the beginning of the year. Cold weather does not keep anglers like Matt Strobel off the lake.

He begins on this lake for the early fishing because it is a power plant lake and it is in his back yard. Later he moves on to other area lakes as the action begins to heat up.

The seeming lack of cover is a bit deceiving but pre-spawn bass will stage in these areas just prior to moving into the spawning beds. If the water temperatures are in the 50s the water is prime for fishing with lipless crankbaits.

Strobel attributes some of his success to the fact that a lot of people are not accustomed to fishing in water that is 18 to 30 foot in depth. He releases all of his fish immediately except when competing in tournaments. Then he will insert a needle in their side to help the fish avoid the bends from coming up too quickly.

He likes to fish deep water structure such as rock, and secondary points. Strobel uses many of the same techniques in summer as in early spring.  He uses most of the basic baits, just fishes them deeper. Bass feed right up to the time they move on to the beds. As a result they tend to be aggressive and willing to chase moving baits. The sound emitted by most lipless crankbaits attracts and aggravates the fish into biting mode.

Early on, this angler fishes near the warm water discharge of the power plant in the northern part of the lake. As the water begins to warm elsewhere, he moves to shallow grass areas, points and small pockets. Basically as the water warms, fishermen move down the lake.

As the spawn approaches, it is wise to seek bass in shallows.  They are susceptible to pitching and flipping techniques.  The big females will be coming into the bank. It might result in one of those big 5-pound fish the lake is famous for producing.

Strobel recommends Carolina rigs, jigs and spinnerbaits in the spring but is quick to say that you can catch bass on anything. He has seen fish taken on some of the gaudiest looking lures you can buy. He prefers to stay natural in his lure colors and tends to use dark colors.

On warmer days, wind plays a part in just where to find the warmest water. The wind pushes the warmer water to a nearby point or a stretch of shoreline. These wind swept points are great for the bass as they follow the forage fish.

If the water is shallow on the points, you might catch a fish every 15 to 20 minutes. Most of the springtime lures produce fish.

Bass boat electronics assist fishermen to find just how deep the fish are sitting. Then it is a matter of changing baits to reach them. Lures such as Rat-L-Traps and the bottom-bouncing Little Georges are a good choice.

Lake of Egypt is about 9 miles south of Marion via Interstate 57 and Route 37. There are three full-service marinas on the lake.