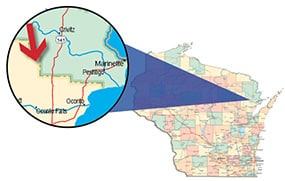 In 2019, the local DNR crew began a spring fyke netting survey on April 15 and concluded April 26. In comparison, spring netting did not begin until April 29 in 2013 because of ice conditions. The primary goals of spring netting in 2019 were to generate a walleye population estimate and mark as many game fish before the creel survey began on opening day.

The most notable change in the spring netting results between 2013 and 2019 was the decreased “catch per unit effort” (CPUE) of northern pike. Pike netting CPUE dropped from 5.3 per net night in 2013 to 1.1 per net night in 2019. However, the crew’s 2019 netting effort was concentrated in areas where walleyes congregate to spawn and was not ideal northern pike habitat.

Bluegills were the most abundant species collected in 2013 and 2019. Results from various survey efforts all improved between years. Summer panfish netting was also completed in 2019 to assess size structure and density. Since summer panfish netting targets spawning panfish, it’s not surprising that results for both were much higher than what was observed during spring fyke netting efforts. Essentially, summer netting confirmed that bluegill size structure is good.

Good year classes have been produced by stocking large and small walleye fingerlings. However, because adult density has shown a steady decline since 2008, the local DNR fishery team recommended the DNR should begin stocking large fingerling walleyes at the rate of 5.0 per acre (4,890 total) in alternate years. Since there is no natural walleye reproduction, the change in stocking strategy from small to large fingerling walleyes should improve walleye density to 1.5 adults per acre by 2025 (the next survey year), providing sportsmen’s club members continue their walleye stocking efforts, as well.

Walleye growth was average compared to other lakes in northern Wisconsin. The local fisheries team had hoped to collect floy-tagged walleyes that were part of the 2013 tag reward study. Only 10% of the tagged walleye were returned in 2013, so team members anticipated collecting tagged fish during the 2019 survey to further assess growth between surveys.

In 2019 the team collected approximately 25 floy-tagged walleye from the 2013 tagging effort, but the tags had degraded and did not contain the tag numbers.

Largemouth bass abundance increased between surveys, and size structure improved between 2013 and 2019,
however, anglers are still concerned about the decrease in larger bass (longer than 14 inches), or the increase in abundance of smaller bass. As a result, the DNR will pursue a regulation change to remove the 14-inch largemouth bass size limit. Preliminary results from the 2019 open-water creel survey indicate that the estimated catch of largemouths was 4,058, but estimated harvest was only 131 bass. Survey data suggests that bass less than 14 inches are abundant.

Only 12 muskies (nine by spring fyke netting; three during summer panfish netting) were collected in 2019. In 2013, 38 muskies were collected, and the population estimate was 43 fish. However, most of the muskies collected in 2013 were 14 years old and corresponded to the last stocking in 1999.

Muskie natural reproduction has been documented, but at a low level inadequate to sustain the fishery. Therefore, beginning in 2015, muskie stockings were initiated at one fish per four acres or 250 per year. All muskies were fin-clipped before stocking. Only one fin-clipped muskie was collected in 2019. None of the muskies stocked since 2015 are sexually mature, which is probably why none were collected during the 2019 spring netting when mature muskies were spawning. If the number of stocked muskies collected during the next spring netting survey (2025) does not improve, the DNR will consider increasing the stocking rate to 500 per year.