Perrysville, Ohio — Pleasant Hill Lake in northwest Ohio is an old lake, built during World War 1 as an impoundment of the Clear Fork of the Mohican River. 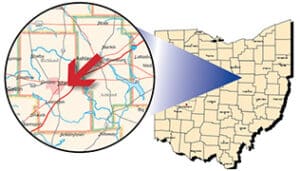 It is 700 acres of water that holds a good amount of fish, primarily saugeyes, bass, and panfish. Muskies are an added bonus.

The saugeye population has a good distribution of year-classes with fish averaging 14 inches and some specimens up to 26 inches. The angling outlook for this species is rated excellent by the ODNR Division of Wildlife.

Saugeyes are the only species that are stocked in this unlimited horsepower lake.

“It gets a lot of recreational boat traffic,” said Brian Kinter, a fisheries biologist for the ODNR Division of Wildlife in Findlay. “It can be really busy down there in the summertime. I know a lot of anglers try to get there in the spring and fall or in the mornings before that boat traffic picks up.”

Saugeye fingerlings are stocked in the spring each year.

“Saugeye fishing there is typically pretty good,” Kinter said. “It’s good numbers and good sizes. We see fish in there every year that are over 20 inches and pretty good numbers.”

The minimum keeper requirement for saugeyes is 15 inches with a six-fish daily bag limit.

Kinter mentioned the beach area of the lake as being a good spot to try outside of the swimming season. Early spring and fall would be a good time to target that area for saugeyes, he said.

There is also a bit of ice fishing for saugeyes here when conditions allow.

The lake sustains a naturally reproducing population of muskies aside from the occasional “drifter” over from nearby Clear Fork Reservoir. Abundance is fair, with fish in the 30- to 45-inch range dominating the population.

“There are some guys who fish for (muskies) quite a bit,” Kinter said. “In our annual creel surveys, we only see just a handful every year. I know in the summertime guys will fish for them in the upper end (of Pleasant Hill) where the Clear Fork of the Mohican River comes in. In the summer, there’s deeper water there so it’s cooler.”

Largemouth bass numbers, too, are excellent, and the upper portion of the lake is where bass anglers target the most effort.

“Largemouth are spread throughout the lake,” Kinter said. “In the lower half, a good place for them in the spring especially is around the face of the dam and rocky habitats around there. There are a few locations upstream where we see good numbers of bass, kind of around the marina and the deeper water there. Average numbers and sizes, right around the 15-inch range.”

Smallmouth bass, on the other hand, prefer the lower portion of the lake. Their abundance is also rated as excellent with fish averaging 15 inches.

“It’s probably one of the better smallmouth bass lakes,” Kinter said. “There’s good numbers of them. You’ll see a lot of them in the 15- to 18-inch range but not many over that size.”

The lower half of the lake, according to Kinter, has a load of rocky substrate that smallmouth bass tend to like.

The statewide regulation on bass of 15 inches minimum and five fish per day applies here.

White bass in the 9- to 15-inch range are numerous and willing biters on hook and line rigs.

“I don’t know if people fish for them as much as they used to, but people used to target the white bass spawn,” Kinter said. “We see them in there up to 15 inches.”

Channel catfish numbers are fair, averaging 17 inches, with individuals up to 28 inches.

“We don’t stock it (with catfish), but there are definitely some channels in there,” Kinter said.

The last time channel catfish were stocked on a regular basis by the Division of Wildlife was in 1981.

Crappies, both black and white are present, are a species that won’t send anglers to Pleasant Hill to target them, but there are a few in there, Kinter said.

“The past few surveys we’ve done for crappies down there would indicate that their numbers are down,” he said. “But, anytime I talk to anglers down there about crappies they talk about how well they’re doing on sizes and numbers. Like 9-, 10-, 11-inch crappies. So, that’s one we’re still trying to figure out a little bit.”

There is a 9-inch keeper requirement for crappies with a 30-fish daily bag.

Shore fishing can be productive for bluegills and pumpkinseed sunfish.

“I don’t expect you’ll see a lot of really big bluegills in there but people do fish for them around the marina and the boat docks,” Kinter said.

Yellow perch is another option, according to Kinter.

“It doesn’t happen very often, but I’ve seen pictures of people with stringers of yellow perch,” he said.

Pleasant Hill Lake is located about 12 miles southeast of Mansfield.