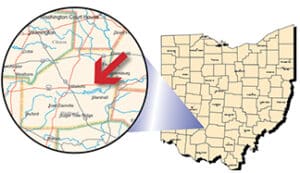 Rocky Fork Lake, located just outside Hillsboro within Rocky Fork State Park, is located approximately 55 miles east of Cincinnati and 65 miles southeast of Dayton. It is easily accessible from U.S. Route 50 or State Routes 124, 506, and 753.

The lake was created in 1951 when Rocky Fork Creek, which is part of the Scioto River watershed, was impounded. The lake has roughly 2,080 acres of water and almost 31 miles of shoreline with numerous inlets and bays with standing timber structure. The average depth of the lake is around 15 feet with some spots over 40 feet deep. Steep, rocky shorelines are present in some sections of the lake while other areas have become much shallower due to siltation.

“It’s an amazing lake,” said Kipp Brown, a fisheries biologist with the Division of Wildlife in Xenia. “One of the best in the district (southwest Ohio).”

There is great boating access with six public ramps conveniently spaced around the lake. Two are on the north side off North Shore Road. The nearby North Beach Marina offers fuel, boat rental, and other services. The Rocky Fork State Park campground ramp includes a marina with full services of fuel, boat rentals, and supplies. The south side has ramps at Fisherman Wharf Lane and Blue Ribbon Road. The final two are near the dam on the southwest side off Lucas Road and the northeast side off State Route 753. The North Beach Marina offers services including rentals and fuel. There are additional private marina service and repair businesses along North Shore Road.

There is also a permanent rock fishing pier in an area of the lake known as “Blinko.” There’s also a lighted, handicap-accessible fishing pier down near the marina.

“There are various fish attractors that we’ve done within the lake,” Brown said.

Rocky Fork is an unlimited horsepower lake and also includes designated areas for boat camping and swimming on the lake.

ODNR has conducted aggressive dredging operations at the lake, and the Division of Wildlife just recently launched a new dredge on the lake, according to a news release.

Many anglers pursue crappies at the lake. The best Rocky Fork bait for crappies is the tried and true minnow on a slip bobber dropped in or next to submerged trees or brush. Using a light jig with twister tails and tipped with a minnow can also help in locating scattered fish. The weed beds will emerge in late April and early May for additional fish cover. Fish the edges of these weedbeds near deeper water to increase chances of catching post-spawn crappies in May and June. There is a 9-inch keeper limitation on crappies here and a 30-fish daily bag limit.

The Division of Wildlife performed a crappie survey in 2020 and found fish just under 12 inches. About half of the surveyed population was 9 inches or larger, said Brown.

Crappies, Brown surmised, “don’t get real old in that lake. They grow fast and die young, which is good because probably a lot of that is harvest … We’re not seeing any stunted (crappies) there.”

The saugeye fishery at Rocky Fork has been a challenge in the past, but appears to be rebounding. The Division of Wildlife faced low stocking rates, statewide, for walleyes and saugeyes due to low hatchery production rates in 2015, 2016, and again in 2018.

However, 2013 and 2014 were the largest ever stocking years for Rocky Fork with 2017 not far behind in numbers. Saugeyes grow quickly in Rocky Fork and reach legal size in about two and a half years. A survey in 2020 for saugeyes showed the average fish was about 16 inches and the largest fish in the sample was 25 inches.

“It’s a good, consistent population,” Brown said. “These things grow like weeds in there.”

Most fishermen either jig or troll for saugeyes. Bottom bouncing rigs with nightcrawlers can also be effective for saugeyes. The best catch rates occur from May through July.

Rocky Fork has a 12-inch bass limit and many bass clubs run tournaments due to the increased opportunity to catch bag limits. Division of Wildlife electroshocking efforts in 2018 produced good numbers and size of largemouth bass with an average length of 13 inches.

During that 2018 survey, the division shocked up 760 bass. The largest was 21 inches.Fishermen tend to work the edge of the weed beds, fallen timber, the points, and rocky shorelines.

“It has a very strong channel cat and flathead population,” Brown said. “Tons of them, and you’ll get some real trophies of both species.”

White bass have been a traditional favorite at Rocky Fork. The spring run is normally up the Rocky Fork Creek with many anglers targeting the area of the State Route 124 bridge. Small spinnerbaits, jigs, and blade baits are most often used. A survey conducted last year showed white bass averaged a healthy 11 inches and the largest was 14 inches.

There is a strong forage base that helps sustain fishing species, said Brown.