The greatest news about Carlton’s Big Lake? Its largemouths 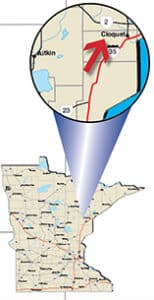 Not every lake in the state has the ability to produce an abundance of walleyes, girthy panfish, fat bass, or trophy-caliber pike. So, the best way to approach some fisheries is with restrained expectations.

From a fishing standpoint, this simply means to wet a line and take what the water gives you. Such is the case with Big Lake in Carlton County, a system that’s a fun lake to fish as long as you do so with an open mind.

“It’s a bass lake first, and northern pike are probably the secondary option,” said Dan Wilfond, DNR Fisheries specialist in Duluth. “Big Lake is a nice little fishery – one of those that you can take the kids to and expect them to get their fishing rod bent.”

At just 526 acres, the lake’s name is a bit deceiving, but Big does have some decent structure along with plenty of vegetation above and below its surface. That’s where you’ll find plenty of largemouth bass.

Big Lake was surveyed by the DNR last year, but spring electrofishing work was suspended due to the pandemic. Previous electrofishing assessments have shown a robust bass population and strong numbers of adult fish – those over 15 inches in length.

In 2013, for example, 104 largemouth bass per hour were sampled via electrofishing, which is considered well above average for the area. In addition, these fish averaged 15 inches in length, 25% were greater than 16 inches long, and 10 year-classes were represented.

“It has good numbers and some big bass. The overall size structure is pretty good,” Wilfond said. “But Big Lake has good bass habitat with quality emergent and submerged weeds to fish.”

Northern pike numbers were up a bit in the 2020 survey compared with 2013. Gill nets averaged just over 12 pike per lift, but they averaged only 20 inches in length. You might tangle with a 30-incher every once in a while, but from a pike-fishing perspective, expect more quantity than quality.

The northern pike also tend to grow slowly in Big Lake, so it takes a while for one to reach 28 inches or larger in length. Just one pike over 35 inches was sampled in 2020.

“You can find some decent pike, but the lake has numbers of small fish in it,” Wilfond said. “Again, I’d have to say it would be a great place to bring a kid if you just want them to catch a bunch of pike.”

Panfish recruitment tends to be pretty consistent in Big Lake, but their slow-growing nature also puts the bulk of them in the less-desirable category.

In 2020, the average length of bluegills sampled was less than 5 inches in length, despite  there being consistent year-classes from 2010 to 2017 represented. There was one large bluegill that measured over 9 inches in length, aged from the 2007 year-class.

There’s a similar trend with the lake’s crappie population. All year-classes from 2011 to 2018 were sampled in last summer’s survey, but the average length was just 7 inches.

“You might find a handful of bigger bluegills, but most are between 6 and 7 inches on the upper end,” Wilfond said. “And, the average size of the lake’s crappies was about the same in 2020 as it was in the 2013 survey.”

Catching a walleye in Big Lake is more of an accident than an expectation. There wasn’t a walleye that showed up in the 2020 survey and only one in 2013.

The lake hasn’t been stocked with walleyes since 2016 and is stocked only if surplus fish are available. There’s obviously no natural reproduction, and the lake’s high northern pike abundance would probably devour any stocked walleyes added to the system.

“There isn’t much of a history for walleyes – Big has never been considered a walleye fishery,” Wilfond said.