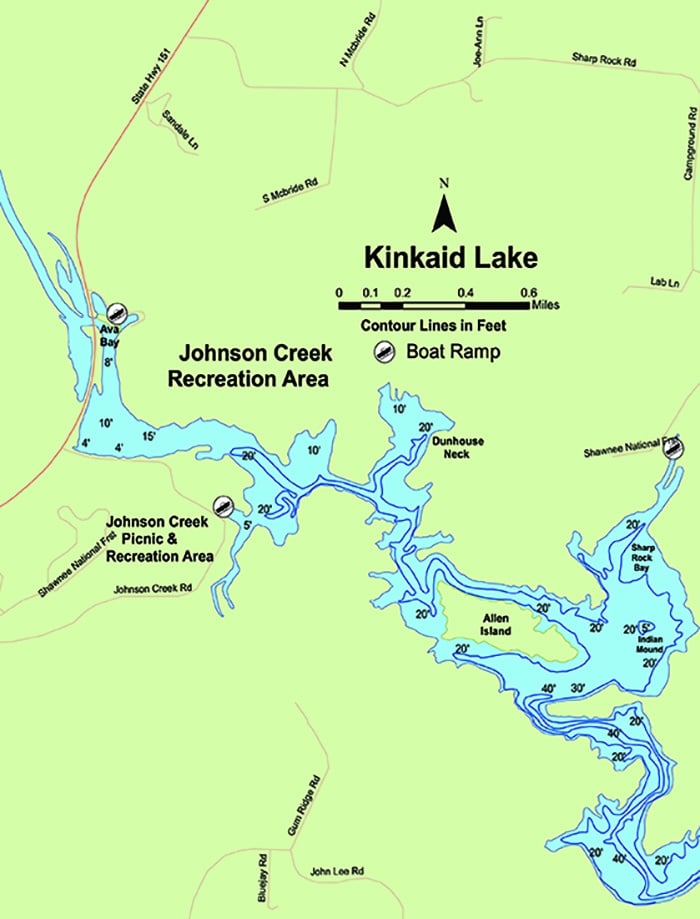 The number of 2- and 3-pound crappies being pulled out of Kinkaid Lake has intrigued and excited anglers across the region – so much so that boat trailer license plates from Missouri, Kentucky and Indiana are part of the parking lot scramble each weekend.

Attention actually spiked back in March 2017, when a state record 4.55-pound hybrid crappie was caught at Kinkaid.

But bass and muskie anglers also have a soft spot for the 2,750-acre lake in Jackson County, just northwest of Murphysboro.

In fishing tournaments during the summer of 2020, several largemouth over 6.5 pounds were weighed in, with the largest topping 7.25 pounds.

As for other fish in Kinkaid, DNR offered the following assessments from its most recent survey:

• Smallmouth bass – DNR first stocked smallmouths into Kinkaid Lake in 2005. The first documented legal-sized (over 16 inches) smallie was observed in 2010.

DNR did not sample any smallmouths during its recent survey.

“They do not appear to be recruiting in Kinkaid Lake and no additional smallmouth stockings are planned,” DNR offered.

An amazing 87% of the crappies collected during DNR’s most recent survey were over the nine-inch length limit, 76% were over 10 inches, and 13% were over 12 inches.

• Muskies – Kinkaid is one of the premier muskie lakes in the state. The fish is stocked annually and many are caught each year in excess of 40 inches.

During its most recent survey, DNR collected 172 muskies up to 45.5 inches in length.

Anglers reporting a tagged muskie in Kinkaid will receive information on the history of that fish. DNR requests that tags not be removed.

Anglers are encouraged to not fish for muskies in the warmer summer months as angling mortality is believed to be very high at this time.

• Walleyes  – DNR annually stocks walleyes and has collected walleyes up to 11 pounds during netting surveys.

“Walleye numbers are not high but trophy-sized fish can be caught,” DNR noted. “The best areas are in front of the dam and spillway during spring high water events.”

During its most recent survey, DNR collected five walleyes, with the largest fish measuring 23 inches.

• Catfish – Kinkaid has an excellent and underutilized channel catfish population. Surveys indicate that a small number of flathead catfish are also present.

• Bluegills – The bluegill population structure can only be described as poor. During its survey, DNR failed to collect a bluegill over 8 inches.

• Redear Sunfish – The redear population is average. Redear sunfish over 8 inches are present in small numbers.

There are three public boat launching facilities around the lake, has a shoreline length of 82 miles, and a maximum depth of 80 feet.

The upper northwest portion of Kinkaid Lake is referred to as the Johnson Creek Area (shown on map above). About 3 miles of this area is a no wake zone that gets very turbid after heavy rain events.

Anglers who catch a tagged muskie are asked to email at shawn.hirst@illinois.gov with the following information: date of catch, length of fish, and tag number (5 digits).