Little Arbor Vitae Lake ranks as one of the most popular fishing lakes on the west end of Vilas County, thanks to a sturdy fishery, whether an angler is considering panfish or game fish species. It doesn’t hurt that much of the lake’s 7.1 miles of shoreline sits within the Northern Highland-American Legion State Forest, so the limited development reduces the number of riparian pleasure boaters that might otherwise limit daytime fishing opportunities. 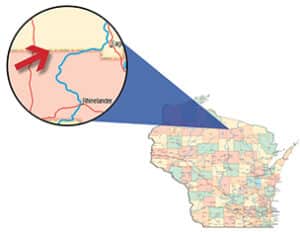 “Little Arb,” as it’s most often referred to locally, has a reputation for being a good walleye lake and “action” lake for muskies. The lake has cyclical perch and black crappie populations.

The local DNR fisheries crew from the Woodruff office ran a spring fyke netting/electrofishing survey on Little Arb the spring of 2017 to assess game fish and panfish populations.

During four days of fyke netting for walleyes, the crew “scienced” 924 adult fish and marked each with a fin clip. Two crews then sampled with electrofishing boats and captured 225 adult walleyes. During those electrofishing runs, 43% (96 of 225) of the captured walleyes bore the fin clip given during fyke netting. The largest walleye captured was a 27.7-inch female.

Based on those results, Little Arbor Vitae Lake was estimated to contain 2,059 adult walleyes, or 3.9 per acre, according to Hadley Boehm, the DNR’s Vilas County fish biologist at the time. An estimated 61% of the adult walleyes were 15 inches long or larger.

For survey purposes – and calculating adult walleye populations – walleyes are defined as all sexable walleye (regardless of length) and those fish of unknown sex longer than 15 inches.

The regulations allow for three walleyes per day, with no minimum size limit, but only one fish longer than 14 inches may be kept.

Survey crews were unable to capture and mark a sufficient number of smallmouth bass from Little Arbor Lake to estimate the population abundance. During fyke net and electrofishing sampling conducted through the end of May that year, 158 smallmouth bass 8 inches or larger were captured. Of those, smallies, 22% were 14 inches long or longer. The largest smallmouth bass went 18.4 inches.

At that time, there were equal numbers of 12-, 13-, and 14-inch smallmouths, with the 15-inchers just a tad off those numbers. If some of those fish stayed in the lake thanks to catch-and-release efforts, Little Arbor Vitae could hold some stud smallmouths this year.

Survey crews were also unable to capture and mark a sufficient number of largemouth bass from Little Arbor Vitae Lake to estimate the population abundance. During fyke net and electrofishing sampling conducted through the end of May that year, 106 largemouths 8 inches or larger were captured. Of those fish, 94% were 14 inches long or longer. The biggest largemouth went 18.9 inches.

Both bass species have a 14-inch size limit, but there is an early catch-and-release season on smallmouths. This year that delayed possession season, opened Saturday, June 19.

During sampling conducted April 11-28 that year, 40 adult northern pike were captured by fyke net. Of those adult pike, 33% (17 of 40) were longer than 26 inches. The largest northern pike captured was a 341⁄2-inch female.

Little Arbor Vitae has had a history of having relatively light pike numbers.

The crew also used the fyke nets and electrofishing to capture as many muskies as possible, getting 40 adult “scienced” and fin-clipped. Of the fish captured, 13% (13 of 40) were 40 inches long or longer, with the largest fish being a 46.8-inch female. Additionally, 11 juvenile muskies (11.2  to 28.9 inches) were also captured.

In 2017, a healthy number of the captured muskies came in just under the 40-inch mark, with 39-inchers being the most abundant “size group.” There were also a strong showing by the 36- to 38-inchers. Those fish should now have grown beyond the 40-inch size limit.

There is a public boat landing on the lake’s northeast corner. Beware the submerged rock just off the landing.