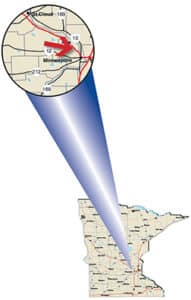 Regarding opportunities to consistently catch panfish in the Twin Cities metro area, Lake Sarah has to be a fishery that’s considered.

Sarah is a 561-acre, long, narrow lake located between the towns of Loretto and Rockford in western Hennepin County. It’s a lake long known for its bluegill and crappie production.

While its proximity to the Twin Cities area keeps the lake busy with angling and recreational activity, Sarah can almost always be counted on for a batch of panfish. It has a long history of offering just that, and the trend continues today.

“It’s always been a good panfish lake despite a fair amount of pressure and harvest,” said Jason Harris, fisheries specialist with the DNR’s west metro office. “Historically, Sarah has held nice panfish, although the size in recent years has remained average.”

The pattern on Sarah has played out like this for years: Crappies reach 7 to 9 inches, bluegills hit the 6- to 7-inch mark, and they tend to get cropped off by anglers. Numbers have remained high, but the overall size structure has not improved.

There are some fish that don’t take the bait and have the opportunity to grow bigger, but most are plucked from the lake before they get the chance. Fishing pressure is pretty high year-round, but especially so during the ice-fishing season.

“I’d say 90% of the people who come in here and go to Sarah, go there for sunfish and crappies,” said Bob Sonenstahl, of nearby Wayzata Bait and Tackle. “But it’s hit way more during the ice-fishing season. It’s covered with fish houses in the winter.”

According to Sonenstahl, most bluegills run in the three-to-a-pound category, with a few half-pounders mixed in. The majority of bigger crappies top out at about 8 to 10 ounces.

But anglers remember that there was a time when Sarah kicked out bigger panfish. With that history, the DNR recently reduced the  bag limit of both bluegills and crappies from Sarah to five each, with the hope that more of those fish get the opportunity to grow bigger.

“Sarah is one of the few lakes in the metro that has the potential to grow larger panfish,” Harris said. “It has good panfish habitat, and we’re hoping the new regulation will improve their size.”

The lake’s largemouth bass and northern pike numbers are strong, although pike are more numerous than bass. They, too, benefit from excellent habitat for spawning and seem to consistently generate productive year-classes.

During a DNR survey in 2017, largemouth bass numbers were consistent with past surveys at 52 fish per hour via electrofishing. They averaged 12 inches in length, nearly 20% were over 15 inches long, and bass up to 20 inches were sampled.

The average size of Sarah’s pike in that same survey measured just less than 20 inches in length, totaling about three-quarters of the total catch. But fish up to 37 inches also were sampled.

“Like most metro lakes, it has high pike numbers, but we see a few over 35 inches in each survey,” Harris said.

Walleye numbers are limited, and the majority of them tend to be larger fish, typically over 19 inches. Sarah is not managed for walleyes by the DNR, but has been stocked privately with about 1,000 fingerling or yearling walleyes during the past handful of years.

Yellow bullheads are an underutilized resource in Sarah despite high numbers of quality-size fish. DNR nets averaged 42 bullheads per net in 2017, which is six times higher than the expected catch rate for similar lakes.

“Over 15% of the yellow bullheads were over 14 inches in length,” Harris said. “So there’s a definite opportunity to catch nice bullheads.”