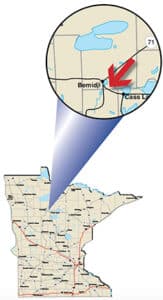 The Mississippi River feeds through the entire Cass Lake Chain of Lakes, and that connectivity benefits fish populations by providing them with a number of different lake types and river habitat in which to thrive throughout the year.

On the western edge of the system lies Wolf Lake, or Big Wolf Lake, depending upon whom you talk to. It’s a 1,073-acre fishery that holds an abundance of walleyes, quality panfish, northern pike, and muskies – all present because the river runs through it.

Wolf Lake’s robust walleye numbers are a fine example of how important the river is to that walleye population. While walleyes are stocked in other lakes throughout the chain, they are not stocked in Wolf. They don’t need to be, because the river provides excellent spawning habitat, which results in consistent natural walleye recruitment.

“Walleyes utilize the river for reproduction, and there is movement of fish between the lakes,” said Andy Thompson, interim DNR Fisheries supervisor in Bemidji. “But there tends to be more natural walleye recruitment in Wolf. It’s a very walleye-centric lake.”

A 2019 DNR survey produced good numbers of eating-size walleyes that averaged 15 inches in length. That seems to be the story of Wolf: a strong resident population of keepers. The larger lakes in the system tend to kick out bigger walleyes.

Bemidji-area fishing guide Dick Beardsley routinely fishes Wolf during the open-water season. He says the river inlet and outlet areas are prime  targets in the spring and fall, while the lake’s weed edges, rocks, and sandy areas hold fish during the summer.

“The early season is solid, but it can be a good walleye lake all summer long. Wolf is just full of really nice cabbage edges and rocks that hold walleyes all summer,” Beardsley said. “If you want to catch good numbers of walleyes in the 14- to 18-inch range, Wolf is tough to beat.”

The lake also supports what seems to be an increasing panfish population. While not overly abundant, the number of bluegills and crappies in Wolf has definitely increased in recent years, and there are quality fish to be caught.

According to the 2019 DNR survey report, the number of panfish sampled is now comparable to catch rates from lakes with similar characteristics. Crappies over 13 inches were captured, and bluegills up to 9 inches were sampled. The lake also has a five-bluegill limit in place.

“Most of the ‘gills I’ve caught out there are 71⁄2 to 9 inches long with an occasional bigger one mixed in. You don’t catch many potato chip-sized bluegills,” Beardsley said. “If you hit it right, crappies from 12 to 14 inches can be pretty common.”

Wolf Lake’s diverse habitat is likely driving the improved panfishing opportunities. There are plenty of bulrush, wild rice, and pencil reed stands that produce fish in the spring, while isolated pockets of cabbage hold bluegills and crappies during other times of the year.

The entire chain has muskies in it, although Cass Lake is probably the most notable. But anecdotal reports indicate that recent muskie-fishing effort has increased on Wolf.

Again, its connectivity to the system’s other lakes downstream is likely benefiting Wolf’s muskie population. Or, many people just haven’t realized that it, too, is a quality muskie lake.

“I’m hearing more about Wolf as a muskie destination in recent years,” Thompson said. “Their numbers could be expanding or anglers are just finding out about it.”

There’s no shortage of small northern pike in the lake, and you might stumble upon a largemouth bass or two and an occasional pod of bigger perch as well.