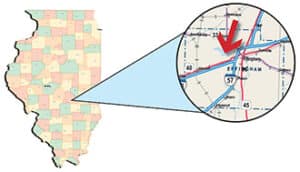 The 640-acre Lake Sara sits in a rather compelling position for anglers who are either eager for variety or cursed by a short attention span.

Sara is one hour south of Lake Shelbyville and one hour north of both Newton Lake and Carlyle Lake – all three considered top fishing lakes in the state.

Not that Lake Sara is anything to sneeze at.

Tucked inside a wooded area with plenty of trees on its shoreline, Sara boasts enough largemouth bass, crappies, bluegills, channel catfish and walleyes to keep fishermen satisfied. The lake also is complemented by a public beach, a boat launching area, boat rentals and plenty of camping opportunities.

Structure-wise, Lake Sara has a maximum depth of 47 feet, and average depth of 18 feet. The lake has 38 miles of shoreline.

The fish population in Sara is considered quite healthy and its crappie and bass populations are most popular.

Walleyes are more of a rumor than a targeted fish in the lake, local say. The truth is that few local anglers actually fish for walleyes – thus few are ever reported to be caught.

But they do exist. In fact,  Lake Sara was one of 10 Illinois lakes utilized as part of an Illinois Natural History Survey study through the 1990s. “Largemouth Bass Predation Effect on Stocked Walleye Survival in Illinois Impoundments” looked at the effects of largemouth bass on newly stocked walleyes. A team of researchers stocked walleyes in Lake Sara and monitored the extent to which largemouth bass preyed on the young walleyes.

The INHS results suggested that predation by bass, a widespread and abundant predator, “has a negligible effect on walleye stocking success in the state.  For walleyes stocked into Illinois impoundments, it appears to play a relatively minor role in influencing walleye survival,” the study noted.

DNR’s most recent survey of Lake Sara provided some insight into the fishery:

• The size structure of the largemouth bass population has changed very little in recent years, and the long-term trend shows a very stable population.

Bass numbers below the slot remained high and body condition was still poor, but should improve with time. DNR noted that the majority of bass below the slot will range from 0.5  to1.5 pounds, while those exceeding 18 inches will be 3.5 pounds or greater.

Harvest of some bass below the slot limit (less than 15 inches) is encouraged.

In an attempt to improve the size structure of the population, regulations were changed to a 15- to 18-inch protected slot limit.

“The population will be monitored closely to evaluate the influence of this new regulation on the population,” DNR noted.

Lake Sara has a six-fish daily limit, along with the protected slot length limit.

• White bass numbers improved in the recent survey. Three year classes were collected and their body condition was excellent. Angling opportunities for white bass should be good this summer and fall.

• According to DNR, the size structure of the bluegill population remains fair at best, with most of the population comprised of fish less than seven inches in length. Body condition is poor and growth rates remain below average.

“Anglers can expect to catch an abundance of fish 5 to 7 inches in length,” DNR predicted.

• Both black and white crappie are present in Lake Sara, and the size structure of both populations improved significantly in recent years.

Data collected from the annual population survey indicated that 42% of the adult white crappie were greater than 10 inches in length. Body condition for white crappie remained stable and was good.

Very few black crappie were collected and their average body condition was less than the minimum target. Together these two species should provide good opportunities.

There is a 25 fish limit for crappies at Lake Sara,

“The channel catfish population is mostly comprised of older and larger fish, biologists reported. “Natural recruitment is low keeping total numbers down, but growth is good.”