Lake Koronis: For fishing, it’s the pride of Paynesville 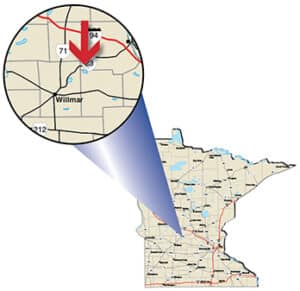 The greatness of Lake Koronis in Stearns County is well documented. This 2,968-acre lake near Paynesville is simply one of if not the best multi-species fisheries this area has to offer.

Koronis is an excellent walleye lake, panfish are abundant and good-sized, it produces quality northern pike, and its bass population – smallmouths and largemouths – is a big draw for local and visiting anglers alike.

Koronis also is a large body of water, rich in structure and vegetation, and has enough deep, cool water to support a tullibee population. It’s the combination of these characteristics that makes Koronis a popular destination for a wide range of anglers.

Josh Hagemeister, owner of Minnesota Fishing Guide Service in St. Cloud, spends countless hours on Koronis each year. He says it’s a great lake to fish with clients because he can target specific fish species or just produce a mixed bag of fish.

“I tell people we’re going walleye fishing but that they’ll probably catch smallmouths or pike, too. You never know out there,” he said. “It’s one of my favorites in the area, and you can fish a variety of patterns, which means any skill level of angler can find something to catch.”

The lake’s walleye population is in fine shape, maintained through natural reproduction and annual fry stocking. A DNR summer survey in 2019 revealed high numbers of walleyes: 17 fish per gill net, up from a historical average of about 10 per net.

The number of quality fish – those over 15 inches long – also was up from past surveys.  In addition, a wide range of year-classes were represented in the survey.

“Although natural reproduction has been more variable in recent years, all year-classes look good,” said Brad Carlson,  assistant fisheries supervisor in Spicer. “I’d say the bite was fair this summer and good this fall, but there’s a tremendous amount of forage – perch and small panfish – in the lake.”

Panfish anglers can expect an abundance of bluegills and crappies, along with some quality in their catches.

Although the survey last year yielded just a 41⁄2-inch bluegill average length and 71⁄2-inch crappie average length, Carlson said that’s not a fair representation of the caliber of panfish in Koronis.

Bluegills around 8 inches and crappies in the 10-inch class are the norm from Koronis. Find the right pod of fish, and it’s pretty common to catch big panfish.

“You can sift through them and catch 8-inch ’gills all day long. There are plenty of nice bluegills in Koronis,” Hagemeister said. “I’d say crappie size has been down a bit the last few years – they get a lot of pressure – but 10-inchers are still common.”

The lake’s largemouth and smallmouth bass also see heavy fishing pressure. Weekend tournaments and club events are quite numerous on Koronis, and it usually takes a hefty bag – often a mixed bag of both – to finish near the top.

“You can find huge schools of largemouths, and they average a couple of pounds, but you can get 5-pounders,” Hagemeister said. “The smallmouths are real tanks.”

Northern pike are above average in size in Koronis. The lake also has a fishable population of tullibees, which provide ideal forage for growing big pike.

Pike averaged over 25 inches in the 2019 survey, and Koronis has a reputation for kicking out some of the nicest pike found in the area.

“It has trophy pike and people know that,” Carlson said. “You’ll find quality with all the fish species in Koronis.”