Crappies, channel cats and bass are improving in Forbes 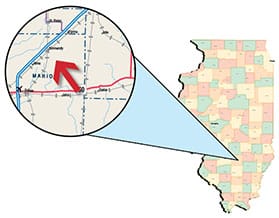 For anglers who like to chase fall largemouths, the good news is that in September and October, gizzard and threadfin shad move to the shallows fin search of plankton and to avoid predator bass that drive them into coves and shallows.

“Finding good weed growth seems to be the key to finding fall largemouth bass on Forbes,” noted angler Don Gasaway, who reports that the bigger fish tend to be found somewhere in or near weeds.

“Topwater lures can be worked over any surface vegetation on the lake and the water beneath the vegetation is enough to excite even the most jaded of bass anglers,” added Gasaway. “Spinnerbait and buzzbait anglers often find fish over main lake and secondary points. While working these points keep alert for bass forcing shad to the surface in a feeding frenzy.”

The 585-acre Forbes Lake is located in Marion County, about 13 miles northeast of Salem. It has a maximum depth of 31 feet and has 18 miles of shoreline.

Along with largemouth bass, the population in Forbes is comprised primarily of bluegills, redear sunfish, white crappies and channel catfish. The lake has regularly been stocked with saugeyes and hybrid striped bass.

There is a strong population of yellow bullheads and common carp, some which exceed 20 pounds in size.

DNR regularly surveys Forbes. The most recent survey was conducted in 2019 and revealed the following notes from DNR fisheries biologists:

• Largemouth bass: To improve the growth rates and condition of the smaller stunted bass and increase the numbers of larger bass, a 14- to 18-inch protected slot limit was placed in effect in 2015. On April 1, 2019, the slot limit was replaced by a 14-inch minimum length limit.

The fall 2019 survey showed that all of the largemouth bass size structure indices met, or exceeded, their target ranges. Electrofishing catch rates and average body condition both improved and remain over the minimum target.

“The percentage of bass over the new 140-inch minimum was down slightly from 2018, but nearly one-third of the adult bass collected were over 14 inches,” DNR noted. “In 2020, anglers can expect the bass under 14 inches to weigh up to 1.3 pounds and bass over 18 inches to range from 3.2 to 6 pounds, with a few larger fish up to 7 pounds.”

• Bluegills: The size structure of the bluegill population in Forbes remains poor. Body condition was much higher for smaller fish than larger fish. The fishery continues to be comprised almost entirely of fish under 7.5 inches in length.

• Crappies: The size structure of the white crappie population improved slightly, but remained relatively poor. The percentage of the population exceeding 10 inches in length increased again. Average body condition improved above target for the first time in seven years. Anglers can expect most fish to range from 7 to 10 inches in length, with a few larger fish coming in at 14 inches.

• Saugeyes: Only four saugeyes were collected in the 2019 survey. These fish represented four different year classes at a catch rate of just 1 fish per net-night and 0.25 per hour of electrofishing.

The 2018 survey produced three year classes of hybrids and at a catch rate of just 2 fish per net-night.

Forbes is currently not a very good lake for hybrid striped bass.