Borden an excellent fishery in shadows of Mille Lacs 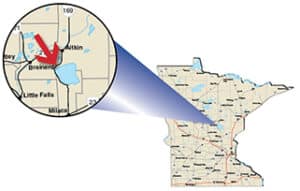 Head north out of Garrison on County Road 18 and you’ll drive right past Borden Lake, a 1,000-acre fishery lined with bulrushes that often gets overlooked by anglers.

Obviously, Lake Mille Lacs is the big draw in these parts; it’s only a stone’s throw from Borden. But on those days when the wind might prevent you from fishing Mille Lacs or you’re looking for a little more diversity in your fishing outing, Borden is an excellent option.

While crappies and northern pike are typically primary targets for anglers who frequent Borden, the lake also kicks out plenty of largemouth and smallmouth bass, produces some walleyes, and might even give up a rogue muskie every once in a while.

“Borden is known as a crappie and pike lake, but I think that’s a misconception,” said Jesse Williams, of Oars ‘n Mine Bait & Tackle in nearby Crosby. “It’s a pretty good multi-species lake that has all kinds of structure and isn’t overly fished.”

Borden’s crappie action tends to peak in the spring, typically in the bulrushes or wild rice stands throughout the lake. The winter also provides a good window when these fish suspend in bigger schools over deep water.

A targeted trap net assessment conducted by the DNR in the spring of 2017 produced crappies up to 131⁄2 inches, they averaged nearly 10 inches in length, and 64% were 9 inches or longer.

According to David Lockwood, DNR Fisheries specialist in Brainerd, crappies of this caliber seem to be pretty consistent year to year in Borden. Good habitat leads to consistent recruitment of crappies as well.

“A lot of people go there for crappies, and a 10- to 11-inch average size is typical for the lake,” Lockwood said.

Bluegills are present in decent numbers, but tend to run smaller. While 9-inch ‘gills have been sampled in most surveys, 6- to 7-inch fish are most common.

Borden is a fine bass lake, providing an opportunity to catch both largemouth and smallmouth specimens. There’s plenty of vegetation above and below the surface that holds largemouths, while the lake’s rock and sand areas are prevalent enough to sustain a respectable smallmouth bass population.

Largemouths are more numerous than smallmouths and generally provide a wider range of sizes. You won’t catch nearly as many smallmouth bass, but when you find them, they are good-sized fish.

“There’s a lot of 15- to 17-inch largemouths, but we see a few 18- to 20-inchers on our league nights,” Williams said, noting that his local fishing club makes Borden a regular stop each season. “When you find the right bunch of smallmouths, 17- to 19-inch fish are typical. It’s a really fun lake to fish bass on.”

Northern pike abundance is high, and the lake is not overrun with small fish. DNR survey and anecdotal angler information indicate that the overall size structure is respectable – somewhere in the 28- to 34-inch range on the upper end of the tape.

Williams pointed out that Borden is a popular winter destination for northern pike spearing and angling each year.

The lake’s walleye population is somewhat interesting. Borden is not stocked with walleyes, but fish do make their way there from Mille Lacs via Garrison Creek every spring.

The same process seems to be occurring with muskies. Borden has not been stocked with them, but anglers seem to be catching a few more each year.

“It’s not known for walleyes or muskies, but Borden produces some big fish and it has good habitat for both,” Williams said. “I know guys that have caught tagged walleyes and big muskies on it. Those fish are definitely coming from Mille Lacs.”