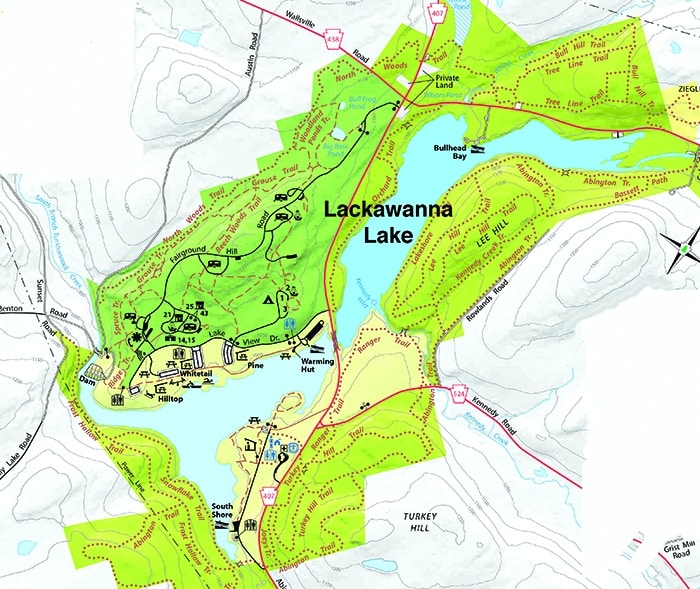 Lackawanna Lake has something for every angler 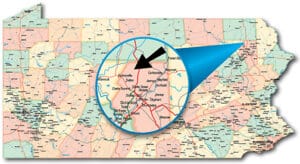 Forgive me a bit for where we’re about to go here.

But clichés aren’t in and of themselves terrible. After all, most got their start based on some nugget of truth.

Think of every community festival, amusement park, traveling carnival or other entertainment spectacle, be it one that comes round once a year or one that opens seasonally. Their owners or organizers, looking to draw paying customers, tout them as being “fun for the whole family” or “offering something for everyone.”

Sure, all those events offer potentially good times for lots of people. But c’mon.

So we’re not going to say that Lackawanna Lake, the 198-acre impoundment in Lackawanna State Park, offers “something for everyone.” At least not in terms of equally great fishing for every finny species that swim in the Keystone State. That wouldn’t be fair.

But if largemouth bass, panfish and/or stocked trout get your angling juices flowing, well, this is a lake worth a visit.

Start with the largemouth bass. Pennsylvania Fish & Boat Commission biologists manage the lake under “big bass” guidelines. They have since 1991.

Big-bass guidelines limit anglers to keeping four fish per day, all of which must be at least 15 inches long. By comparison, anglers fishing waters under general statewide guidelines can keep six bass, and they need be just 12 inches.

The goal of the big bass program is to provide more quality-sized fish for anglers to battle, if not always eat.

Surveys reveal a snapshot in time. Meaning, they’re useful, but they really only reveal whether a lake’s fishery is good – or bad – at one particular season.

The only way to know if that fishery is thriving or struggling is to look at it multiple times, over multiple years, to spot trends.

And that’s where Lackawanna shines on the bass front. Biologists studied its bass in 2002, 2003, 2010 and 2017. In each of those years, Lackawanna – considered a fertile water, not surprisingly – produced lots of largemouths and plenty of big ones.

The 2002 survey found a “dense population” of bass, with the largest seen going 21 inches and 5.3 pounds. In 2003 the “excellent bass lake” produced again, giving up fish as long as 22 inches.

That’s consistency of a good kind.

No wonder commission biologists today still rank it among Pennsylvania’s top four medium-sized lakes – those between 50 and 500 acres – for largemouth bass in the entire state. The population remains “exceptional,” they said.

But if you prefer targeting fish for the table? Well, this Lackawanna County water is also a prime spot to target for panfish, too.

Bluegills are the most common and widespread gamefish in the lake, numbers-wise. The quality of that fishery is pretty consistent, too.

Exceptionally large gills are rare, as is the case in most places. But biologists consider a 7-inch fish a quality one.

And in surveying Lackawanna Lake annually from 2006 to 2008, they found that the majority of the lake’s bluegills average 6 to 8 inches. So odds of landing a keeper are pretty good.

Then there are the crappies.

At one time, Lackawanna Lake was home to both blacks and whites. Traditionally, the latter grew fastest and biggest – and then they disappeared. For reasons unknown, biologists couldn’t find any after about 2005.

The commission is trying to remedy that. It stocked white crappies in the lake every year from 2010 to 2014 in an attempt to jumpstart their numbers.

Biologists returned to the lake that spring and set trap nets to capture panfish. They got 576 black crappies, ranging in size from 3 to 15.9 inches long. Encouragingly, they also got 108 white crappies ranging from 5 to 13.9 inches long.

What’s more, the average white crappie was bigger than the average black crappie, suggesting that, if they can survive, they will again grow faster and larger.

Biologists said then the question was whether the white crappie population could sustain itself. All of those seen originated from the artificial stocking, so “only time will tell if they thrive,” they added.

The jury remains out on that, though fishing reports from the lake in recent seasons tell of anglers still getting white crappies, and some nice ones.

Finally, in spring, Lackawanna Lake is stocked with trout. That’s a put-and-take fishery, as most stocked trout ones are, but the lake does get a good number of fish and holds them into late spring.

Trout fishing is permitted year-round at Lackawanna Lake, too, so anglers can target fish through the ice – they’re popular then, as are panfish – and as soon as spring breaks.

There are other species swimming in Lackawanna Lake, too. One worth noting is chain pickerel. They’re not super-abundant, but can get big.

Past commission surveys found fish in the 28-inch range. That would out them at about 8 pounds.

For comparison’s sake, the state record pickerel – which also came from this area of the state, specifically Long Pond in Wayne County – weighed 8 pounds, 15 ounces.

As for where to fish at Lackawanna, shore-bound anglers find deeper water near the dam breast, Kennedy Creek Point, the Route 407 bridge, and the “neck” near the Bullhead Bay boat launch.

All anglers might want to check out the Fish & Boat Commission’s  map detailing the locations of fish habitat structures in Lackawanna Lake at https://bit.ly/3j8bwr2.

Complete with GPS coordinates, the map tells anglers what structures are in the lake, where and how deep they are. It’s great information for getting started on a lake worth visiting.

What you should know: Trout fishing is permitted year-round so anglers can target fish through the ice.

The 2-5-mile long lake has more than 7.5 miles of shoreline.

South Branch of Tunkhannock and Kennedy creeks feed this lake.