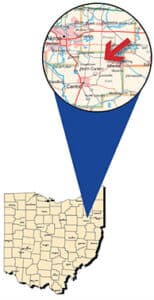 Dale Walborn Reservoir in northeast Ohio is part of the Mahoning River system of lakes in that part of the state.

And, though it may not be as acclaimed as a Berlin Lake in the same system, it does contain a sleeper largemouth bass fishery that rivals all other lakes in the area.

The 650-acre lake is owned by Stark County and managed by Stark Parks with a fisheries management agreement with the ODNR Division of Wildlife.

There is a restriction on boat motors of 10 horsepower.

“It’s kind of interesting because Walborn flows into Deer Creek, which flows into Berlin,” said Curt Wagner, fish management supervisor for the Division of Wildlife in Akron. “Walborn’s the most upstream (reservoir in the Mahoning system), so things flow down into Deer Creek and then into Berlin.”

Walborn is stocked with hybrid striped bass and channel catfish. For a time in the early 2000s, the lake was stocked with walleyes, according to fisheries records.

“When we started doing hoop netting (sampling) five or six years ago for channel catfish … we were shocked at just how abundant channel catfish were in some of these systems and just how terribly stunted they were,” Wagner said. “Walborn and it’s neighbor, Deer Creek, took the cake in terms of numbers of small catfish.”

Still, there are a good number of anglers who target catfish at Walborn, says Wagner.

“Clearly, you don’t want to stop the catfish (stocking) program,” he said. “But, we also know that even in a healthy population, (catfish) are long lived. So, you don’t want to pull the plug and not stock for a while because you’ll eventually create a gap of existing fish. But, we did dial back the catfish stocking on Walborn drastically.”

“I’m guessing we’re just going to (stock) 1,500 for a while,” Wagner says. “Because the growth rates were just so slow. You could hardly find a (catfish) over 18 inches. They’re just packed in there.”

Crappies, too, are stunted in Walborn with fish over 8 or 9 inches tough to find, says Wagner.

“I will say, though, that I talked with a few anglers who I chat with regularly and a few of them have found some 12- to 13-inch crappies,” he said. “They’re there, but you’re working through a lot of small fish to find the big ones.”

There is no special regulation on crappies here.

“We certainly encourage harvest (on crappies) and that’s what will help that crappie population is some harvest,” said Wagner. “Not just taking off the top, but keeping those 8- and 9-inchers and filleting them up.”

Largemouth bass fishing is a highlight as was mentioned previously.

“It doesn’t quite have the (bass) metrics of the Portage Lakes, but it’s up there in the discussion of a good bass fishery,” said Wagner. “It’s overshadowed, I think, by the Mosquito (Lake) and the Portage Lakes, some of those other high-profile lakes.”

There is a special five-fish, 15-inch minimum keeper requirement for bass here.

The Division of Wildlife started stocking hybrid striped bass in Walborn in 2014 and it continues today.

The division started by stocking both Deer Creek and Dale Walborn, but it pulled the plug on the Deer Creek stockings soon thereafter.

“What we were finding is that there was so much immigration of these fish coming down through the system,” Wagner said. “I honestly can’t say there’s a solid hybrid striped bass fishery in Walborn itself. I’m sure there are some there, but I’m not hearing of anglers fishing Walborn specifically for hybrids.”

But, as hybrids wash down through the system, Wagner said, anglers are catching them at the dams, tailwaters, and in Berlin Lake especially.

“They’re really filling out that whole three-reservoir system with a really interesting fishery,” he said. “So, why not put them at the top of the sliding board and let them go down through? It’s almost like Walborn is serving as a sort of nursery, a first and second year rearing place for them.”

There are various ways to fish for hybrids, according to Wagner. You can fish for them on the bottom with chicken livers and other natural baits like you would for catfish. You can also fish for them in current seams with plugs and spinnerbaits.

“I kind of think that’s the beauty of them,” Wagner said. “You can fish for them any which way. You can even get them trolling for walleye.”

Stark Parks operates a marina on the lake. A good bit of the shoreline is wooded, but there are many places for shorebound anglers to wet a line, says Wagner.

Dale Walborn Reservoir was built in 1971 as an impoundment of Deer Creek.