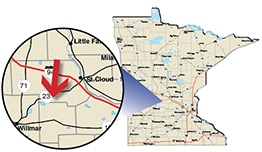 There are 13 lakes that make up the Sauk River Chain of Lakes in Stearns County, all of which are pretty solid multi-species fisheries.

But one of the largest and most recognized within the system is Horseshoe Lake, a 629-acre body of water located near the town of Richmond.

Horseshoe holds an abundance of walleyes, panfish, bass, and northern pike, as well as most river-inhabiting species such as channel catfish. The introduction of muskies in 2011 will likely make it a destination lake for those fish in the future as well.

“There’s certainly a lot of variety throughout the system, and Horseshoe is near the top,” said Mark Pelham, DNR Fisheries specialist in Sauk Rapids. “It’s an excellent fishery for whatever you want to fish for.”

That usually starts with walleyes for many anglers. Horseshoe has a longtime reputation as an excellent walleye lake in both size and numbers, and it appears to be getting even better.

Historically, the lake has been stocked with walleye fry during odd-numbered years, with much success. Natural reproduction has always been part of the equation, too, and it currently is playing a larger role in walleye recruitment – so much so, in fact, that walleyes were not stocked in 2019.

Horseshoe’s panfish population has, and continues to be, healthy as well. It’s known for consistent year-round crappie and bluegill angling action that includes quality fish.

During the 2019 survey, crappie numbers were down a bit compared with past years, but remained strong, and their overall size increased.

“Over 40% of the crappies sampled were longer than 10 inches, and we don’t see that on many lakes in this area,” Pelham said.

Bluegills averaged 6.2 inches in length, but fish up to 10 inches were recorded. Bluegills that run in the 8-inch class are pretty common from Horseshoe.

The lake’s largemouth bass population is solid, thanks to ample vegetation, spawning habitat, and forage. That’s resulted in high numbers and big fish.

In recent years, smallmouth bass have been catching up to Horseshoe’s largemouth population. DNR electrofishing in 2018 yielded just about as many smallies as largemouths, and the average length of smallies was 14 inches. Fish up to 20 inches were sampled.

“We’re now (counting, via electrofishing) almost as many smallmouths as largemouths, and that wasn’t the case years ago,” Pelham said.

Northern pike numbers are average in Horseshoe, and those fish tend to be better in the size department than those in most lakes in this area. Pike up to 35 inches were sampled in 2018, while 34% of them were longer than 24 inches.

Channel catfish are abundant and an easy catch year-round. While recent survey information indicates a slight dip in overall numbers, the state allows anglers to keep 10 cats throughout the system.

The jury is still out on how every-other-year muskie-stocking efforts are going. The DNR has not conducted any specific muskie assessments on the lake, but expects to do so within the next couple of years.

“We hear about (muskies) being caught, including a couple of 40-inchers,” Pelham said. “It should be a great muskie fishery.”