Enjoy a summer fishing/camping adventure in the SRCA 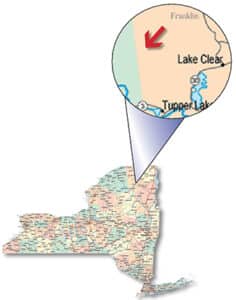 It’s a one-of-a-kind: the only officially designated canoe area in New York State. And one where seeing an angler with a lightweight canoe on their shoulder is a regular occurrence.

Of course we’re talking about the St. Regis Canoe Area in Franklin County, in the northern Adirondacks, which sports over 50 bodies of water within its 18,400 acres with dozens of canoe portages connecting the more prominent trout fisheries.

Water is everywhere. When you look at this region on a map you see as much blue as green. The waters stand out that much. When combined with waters in the adjoining Fish Creek Ponds area (part or the Saranac Lakes Wild Forest) to the south, the fishing and camping possibilities are endless.

The SRCA is basically a Wilderness Area, in terms of classification, that is designated for flat-water paddling and camping. There is no motorized usage allowed, but the tract is accessible from nearly every direction except from the west.

Anglers can access the water via a short carry on Long Pond, as well as on Upper St. Regis Lake, Hoel Pond and Little Clear Pond. A six-mile abandoned (and closed) former truck trail, known as the Fish Pond truck trail leads into its interior, with several portages connecting other ponds. 70 designated campsites, including three lean-tos, are available to campers.

Fieroh says brook trout management focuses on pond reclamations, and many ponds have been reclaimed in recent decades. Ledge Pond, reclaimed in 2009 and Embody Pond (near Long Pond), in 2016 are the most recent.

Perhaps most attractive to brook trout anglers visiting the SRCA is the chance to fish for heritage strain brookies.

“There are several waters containing heritage strain brook trout, and all are doing well,” Fieroh said. “Nellie and Bessie Ponds contain the Horn Lake strain while the Windfall strain can be found in Ledge Pond and Embody Pond.”

Two popular canoe routes showcase a number of waters and the chance for either a day trip or an extended camping/fishing trip. The popular Seven Carries route begins off Rt 30 on Upper St. Regis Lake, or from Little Lake Clear (which along with Little Green Pond is off limits to fishing being a brood stock water for the Adirondack Fish Hatchery). The Seven Carries route visits Lower Saint Regis Lake. It passes through St. Regis Pond, Green Pond, Little Long Pond, and Bear Pond.

The Nine Carries is another popular canoe route. There are a number of variations of this route that passes through Fish Pond and connects two of three waters – Long Pond, Hoel Pond, or Little Clear Pond. Along the way the route passes through Nellie Pond, Little Long Pond, St. Regis Pond and/or Ochre Pond. Being more remote, these ponds and those nearby  attract serious and adventurous trout anglers.

At one time the SRCA held the New York State record for brook trout. Trout fishing The standard Lake Clear Wobbler (Lake Clear is nearby) trolled slowly through a deep hole with a worm rigged on about 18-inches of leader is a standard for catching brook trout and rainbows with the brookie being the more sought after species.

Bass anglers too can enjoy their own trip, one that includes visiting Slang, Turtle and Long Ponds after paddling across Hoel Pond (another trout water).

Another suggested trip for those seeking a taste of the SRCA is to cross Little Clear Pond and carry the .6-mile portage to St. Regis Pond. Numerous campsites abound here, making it a perfect base camp for pond-hopping to other waters.

As for the pond itself, brook trout, lake trout and panfish are all caught here, but splake – the brook trout/lake trout hybrid – have been actively stocked over the years.

SRCA anglers work for every bite, but being in a remote setting with numerous fishing options is worth the effort.

Access is primarily from the south and east along Route 30 and especially of Floodwood Road.

The debate over the new-versus-old start for the Pennsylvania deer season is now in the Capitol, with State Rep. Brian