A three-season guide to fishing with floating minnows, wobblers, and crankbaits

Cranks, stickbaits, plugs, jerkbaits, minnow baits. Whatever you call them, the forage imitation category of hard baits is bigger and more versatile now than ever before.

Anglers have unlimited options in the way of sizes, shapes, actions, and color combinations. Each allows the opportunity to produce a mixed bag of gamefish, target a specific species, and fish them effectively during the entire open-water season. 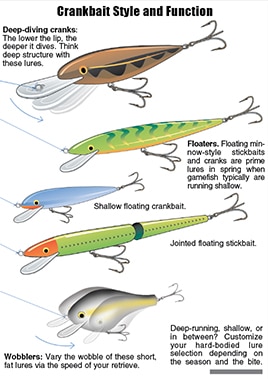 As the open-water fishing season begins and water temperatures are cool, most guys will be working a live minnow presentation, especially on smaller inland lakes.

But a floating minnow can be as productive during the spring and into the early summer fishing season. These baits are long, slender baits with small lips designed to work near the surface and typically in shallow water.

Walleyes, northern pike, and bass are usually shallow during the first several weeks of the open water season, feeding aggressively on baitfish as they recover from the spawn.

You can match that natural forage with a floating minnow presentation. These are built more for casting rather than trolling this time of year.

Cast along shorelines and specific pieces of shallow structure with a floating minnow in the spring or early summer and you’ll likely pick off a mixed bag of fish. 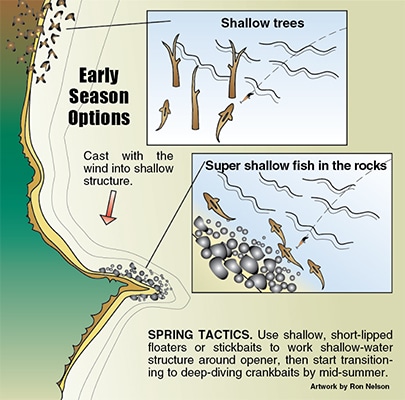 Floating minnows also work well in some river fishing settings. Again, look for fish along the shorelines or sitting in and along current breaks – think shallow spots that hold aggressive fish.

There are better options for trolling, but we can use floating minnows during some trolling runs in the heat of summer for walleyes, too.

A prime example? Lakes with an abundance of shad, ciscoes, or other baitfish sitting higher in the water column and feeding near the surface, typically at night.

Run a floating minnow a few feet below the surface over a lake’s deepest depths. Walleyes are up feeding on this natural forage and will inhale a floating bait that’s long-lined behind the boat. This method also often produces some of the biggest walleyes in a system.

As water temperatures climb in early summer and weeds start to develop, floating minnows are an ideal way to work the top of the weeds, too.

It’s a simple cast-and-retrieve process that allows you to tickle the weed tops and pick off a mixed bag of walleyes, bass, and northern pike.

The late spring and early summer period also allows you to work wobblers into your arsenal. These are short, fat lures that kick off more intense, side-to-side action.

Generally, wobblers are most productive when worked with some speed. Whether you troll or cast these baits, the idea is to usually burn them to maximize their erratic action.

Yes, there’s always an exception – say those times when slowing a wobbler yields more strikes – but that’s the beauty of this bait: Its versatility.

Wobblers create greater water movement and also give off more sound. This makes them an ideal option in shallow to mid-range depths, dirty or stained water, or at night.

Walleyes, for example, generally remain very active during the early stages of summer, and wobblers definitely will entice reaction bites.

The third option, crankbaits, is really a general term for the largest, most versatile category of forage-imitating hard baits.

Deep-diving cranks, those with larger lips, make working deep water and deep structure possible, while covering a lot of water in the process.

Generally, use deep-diving crankbaits in depths that cover the teens – 13 to 18 feet or so for bass, pike, and walleyes.

Mid-depth running crankbaits can cover big pieces of water, too. But they’re designed to work more specific depths. Think shad-type baits that run from 8 to 14 feet.

Crankbaits with small lips and stout bodies generally work best in less than 10 feet of water.

You can get these shallow to mid-depth running crankbaits down to deeper depths, too. Leadcore line, three-way rigs, or other added weight options allow the aforementioned baits to fish deeper than they’re actually designed.

With an opportunity to troll or cast, fish day or night, and their ability to cover just about any depth or structure, crankbaits probably qualify as the world’s best year-round lure.