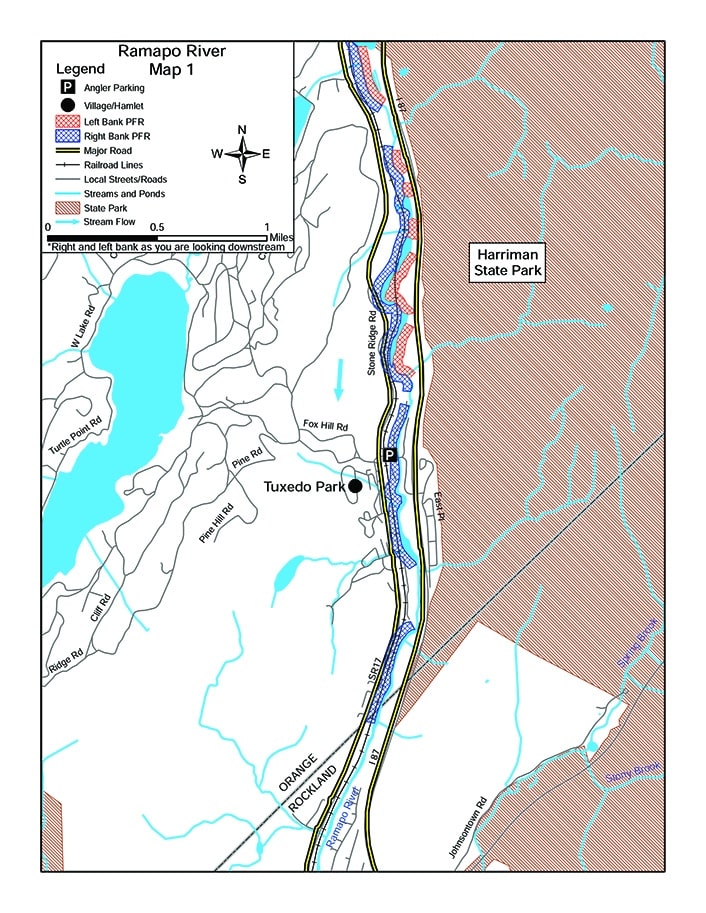 There’s no shortage of public fishing access on the Ramapo River.

And there’s no shortage of trout, either.

The popular – and heavily stocked, which might explain its popularity – stream, which flows through Orange and Rockland counties, offers some fine fishing amid a populated area.

Too, a lengthy stretch of the river flows through Harriman State Park, which offers plenty y of access along both banks.

And special regulations allow for fishing all year, with a liberal five-fish daily limit of trout of any size.

While the fishing is generally good and the Ramapo River attracts plenty of angling attention, make no mistake: this is clearly a put-and-take trout fishery. The river’s waters warm rapidly in the summer to temperatures not conducive to trout survival. As a result, the best fishing can be found in the spring when waters are cooler and DEC makes its stocking trips to the river.

DEC’s current stocking policy calls for the planting of 2,700 yearling rainbow trout, 2,800 yearling brown trout, and 200 2-year-old browns, with stockings typically taking place in late March ahead of the April 1 statewide kickoff (although that’s not an issue on the Ramapo). Another 2,050 yearling browns and 400 two-year-old fish of 12-14 inches are stocked in mid-April.

Not surprisingly, that’s when the bulk of the fishing occurs. And given the region’s heavy population and proximity to New York City, which is less than 50 miles away, don’t expect angling solitude when you hit the river.

The Ramapo winds its way through many residential areas and is parallel to Interstate 87, State Route 17 and a heavily used rail line. In fact, it’s possible for some anglers in the region to board the train out of The Big Apple, fishing rod in hand, and access the river at a train stop.

The river is heavily stocked from the hamlet of Southfields (town of Tuxedo, Orange County) to the village of Hillburn (Rockland County) at various parks, road crossings and informal access points.

In addition to the Public Fishing Rights secured by the state along many of the stocked sections of the river, the Ramapo also flows through the massive (47,527-acre) Harriman State Park, which offers plenty of additional access.

The river is about 30 miles in length, running from Round Lake in a mountainous area in central Orange County and flowing southeast to Harriman, then into western Rockland County and ultimately into northern Bergen County, New Jersey, and into Potash and Pompton lakes in the Garden State.

The river then actually flows out of Pompton Lake and is still called the Ramapo River until it forms a confluence with the Pequannock River; from there it’s called the Pompton River.

The Ramapo is popular among fly-fishers in the spring, given its accessibility and heavy early-season trout stockings.

You won’t find an easier water to locate than the Ramapo River. Just head south on Interstate 87 out of New Paltz or north on 87 out of Sloatsburg. The river generally runs tight to the highway, and Harriman State Park is also easy to locate to put you in the fishing game.