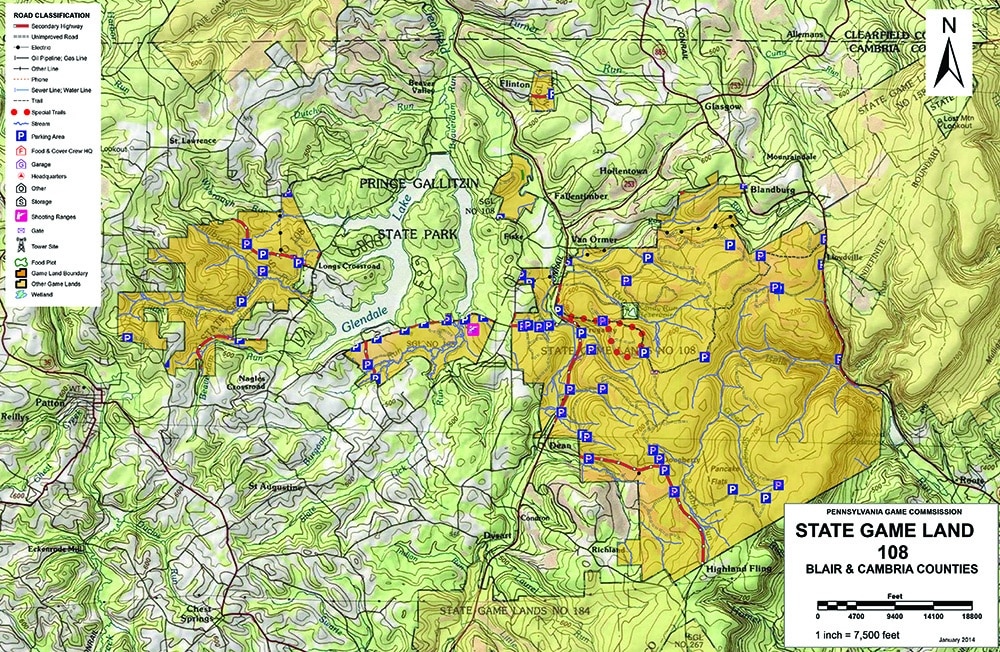 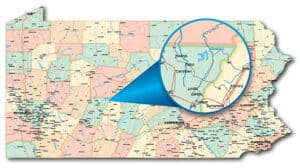 It seems like there is no end to the outdoor recreational opportunities offered by a huge complex of public property straddling the Blair County-Cambria County border.

Nearly 5% of this game land is hardwood bog-like swamp habitat, so waterfowl and woodcock provide some excellent hunting opportunities.

This tract maintains a good population of deer, turkeys and squirrels, as well as other forest-oriented game birds and mammals. The bear populations continues to increase in impressive numbers.

Hunting coyotes during the winter here is becoming increasingly popular.

This game land is also on the pheasant-stocking list. Last year in five separate areas, Cambria County was stocked with 3,940 cock birds and 1,650 hens. Two of these locations were in State Game Land 108 and adjacent Prince Gallitzin State Park.

There are more than 200 acres of herbaceous openings, on game land 108, much of which is planted in switch and summer grasses and native flowering plants, surrounded  by a stand of clover.

Land Manager Dan Yahner reports that in a cooperative agreement with a Tyrone, Pa., papermill and a waste-removal vendor, the residue from the manufacturing of paper, consisting of wood pulp fiber and calcified lime, has been applied to planted areas.

This residue, applied to the game land’s herbaceous openings, topped with a small amount of fertilizer, has had a remarkable effect on plant growth on these once strip-mined areas.

Yahner also said he receives some sportsmen assistance from the Blair and Cambria chapters of the National Wild Turkey Federation chapters. A dozen mini-orchards of fruit trees have been established with their help on the parcel.

Numerous power and gas lines bisect this parcel, offering convenient ingress and egress to the interior of the game land. Access can be had from routes 865 and 53.

One handicapped hunter access area can be reached  from Route 53. The other handicapped trail access point begins at the Giske parking lot in Prince Gallitzin State Park.

Horse riding/bike trails include a 3.5- mile path that begins approximately 1 mile from the village of Dean on state Route.1016 (Wopsy Road).

This designated route begins at a prominently marked gate, and the trail follows a defined game lands road to a prominent reclaimed mine site. The well-maintained road circles the mine site and exits approximately two miles distant from Dean.

Another four-mile trail begins on the north side of Route 865 at the village of Lloydville and continues along an old railroad grade down the mountain gap to a point near the Bellwood Reservoir along Route 865.

Another choice is a five-mile ride beginning at the first parking lot along Long Road on the western side of Glendale Lake.

A shorter 2.5-mile trail begins at the parking lot along Marina Road.

The “granddaddy” of these trails is a 16.5-mile path that begins adjacent Route 53 north of the Catholic church in Frugality.

This lengthy trail follows an intricate route, ending on an old railroad grade, then exiting on adjoining State Game Land 158 on Route 865.

It’s worth noting that these designated horseback/biking trails can be used by a myriad of other recreation seekers, including hunters.

One of the more attractive features of State Game Land 108 is that it adjoins Prince Gallitzin State Park, which is 6,249 acres and offers nearly 3,000 acres of hunting opportunities. This park is also the site of the 1,600-acre Glendale Lake.

Glendale Lake was formed by the damming of Lick Creek and isolated sections of its large double-bays are nearly contiguous to State Game Land 108.

The lake offers 26 miles of shoreline with abundant panfish available. A spring turkey hunt paired with fishing for crappies or walleyes can provide a pleasant day afield.

Ice fishing for many fish species is popular and productive on Glendale Lake.

This area does not lack in water habitat. Streams meandering through game land 108, include Beaverdam Run, Kill Buck Run and Lick Run, all of which are stocked with trout. Other waterways include Dutch, Bear, Little Kill Buck, Burgeon Sandy and Green runs.

This game land provides numerous opportunities for varied outdoor recreation seekers. It’s a popular destination for those who want to be challenged by the elements.

This parcel typically offers colder weather, gustier winds and an early snow cover that accumulates more than other nearby public lands.

What YOU SHOULD KNOW: There’s a good population of deer, turkeys, bears and squirrels as well as other forest-oriented game birds and mammals. The land also holds impressive bear numbers and coyotes.

For more information: Contact the Southcentral Region Office of the Pennsylvania Game Commission in Huntingdon, Pa., at 814-643-1831.