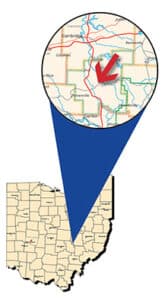 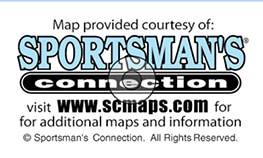 Caldwell, Ohio — If you live anywhere near the vicinity of Caldwell in southeast Ohio, you’ve likely at least seen Wolf Run Lake.

The 220-acre impoundment in Noble County is so close to Interstate 77 that you could probably cast a line from the highway and hit water.

Well, maybe not that close, but Wolf Run’s proximity to the four-lane highway means this lake is no secret, particularly among the locals.

Wolf Run is a picturesque lake, meandering through a series of shady inlets and secluded coves where a good bit of structure is available, including that of the artificial variety that has been placed in the lake dating back to the 1980s. In 1998, 420 Christmas trees were placed as fish concentration devices, according to Division of Wildlife records.

Wolf Run would be a good place to hit for some spring largemouth fishing. Electrofishing surveys were last completed in 2018, said Don Swatzel, a fisheries biologist for the DNR Division of Wildlife in Athens.

“The 2018 sample results were very similar to past surveys in both size and in numbers,” he said. “There are good numbers of bass 15 inches and less at Wolf Run, with a small number reaching 19 to 21 inches. It is a clear, deep, steep-sided lake and can be a challenge to fish. The 14- to 20-inch protected slot, three fish split daily limit where two fish must be less than 14 inches and one fish may larger than 20 inches, remains the regulation. The hope is that this regulation will enhance Wolf Run’s reputation as a lake that can produce a trophy bass.”

The bass regulation was put in place in March of 2013.

“Because of limited angler harvest and slower growth of bass in Wolf Run it is still too soon to expect measurable changes in the population,” Swatzel said. “Division of Wildlife District 4 fish personnel will continue to monitor Wolf Run’s bass population on a every other year basis with the next survey scheduled spring of 2020.”

The Division of Wildlife started stocking saugeyes at Wolf Run in 2002 and typically pours in about 100 fingerlings per acre on an annual basis. However, due to surplus saugeyes produced at the hatcheries, Wolf Run has received double the amount of stockings in each year except 2016 and 2018, Swatzel said.

“Popular fishing areas for saugeyes are the upper, shallower end of the lake around the beach, rocky points with the channel close by, and the stone riprap along the face of the dam. Three year-old saugeyes in Wolf Run are 16.5 inches long, with 4-year-olds reaching 19.5 inches. Surveys have shown decent numbers of saugeyes up to 24 inches long,” Swatzel said.

The division believes Wolf Run is a good candidate for a saugeye fishery given its location near a primary highway and relatively high use among anglers.

The bluegill sunfish population is moderately abundant with an average size of 5 inches.

“Sunfish remain stable but are still small in average size,” Swatzel said. “Crappies also are available for anglers but numbers are below average. Anglers can expect most fish to be around 7 or 8 inches with some up to 10 inches.”

The area around the campground is also popular with sunfish anglers.

Channel catfish have been stocked every other year since 1984, and anglers in the 1990s reported catching fish up to 45 pounds here, according to Division of Wildlife records. Nothing of the sort has been reported in recent years, but the catfish stocks should be well distributed with the bi-annual stocking of almost 5,000 yearlings. The lake’s eastern shoreline offers the deepest water for the best catfish bite.

“Channel catfish continue to be stocked in alternating years,” said Swatzel. “Recent hoop netting surveys produced below average numbers with majority of the fish 12 to 16 inches in length. Channel catfish in Wolf Run grow slow, but there continue to be reports of anglers catching channels up to 30 inches.”

Yellow perch are a new item on the menu, says Swatzel.

“Yellow perch were stocked in 2017 and 2019 in hopes of creating an additional fishing opportunity,” he said. “Future stockings are planned and the Division of Wildlife will be surveying soon to evaluate whether or not these stockings have been successful in producing a yellow perch fishery.”

The annual spring stocking of trout provides good fishing opportunities from March  through mid-summer. Approximately 1,500 to 3,000 catchable trout are stocked annually and anglers fish for them hard here, particularly near the dam on the southwest end of the lake.

Wolf Run, located within Wolf Run State Park, is unique in that it contains Ohio’s only fly-in campground. Pilots can fly in to the Noble County Airport, park the plane at the south end of the runway, and pitch a tent near the north shore of the lake.

One ramp serves boating anglers on the northeast side of the lake off State Route 215. There is a 10-horsepower limit on boat motors at Wolf Run.